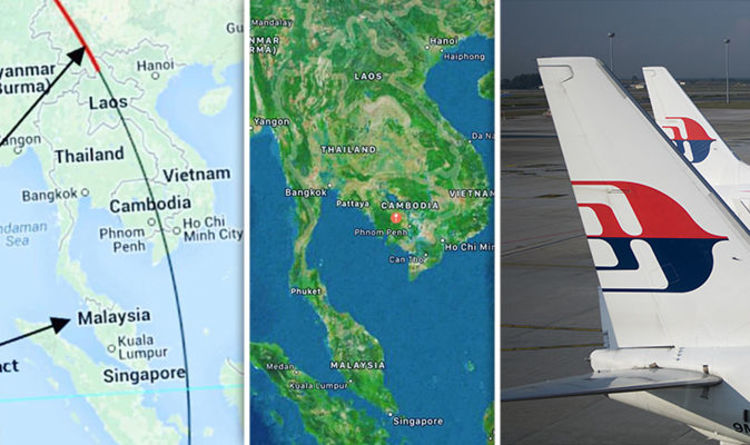 
The missing Malaysia Airlines Boeing 777 was travelling from Kuala Lumpur to Beijing on March 8 2014 before its disappearance with 239 people aboard. Investigators concluded it probably crashed into the Indian Ocean after dropping off the grid, a theory based significantly on satellite data from Inmarsat. However, Mr Wise claims this communication could have been faked.

He said: “For the last four years I’ve been making the case that there is one known way by which the Inmarsat data could have been falsified as it was being transmitted from the plane.

“This falsification would make the plane look like it was heading south when it was really heading north, and would explain why an exhaustive quarter-billion-dollar search of the southern seabed found no trace of the plane.”

Mr Wise dismissed the main theory as “absurd”, stating his own idea is much simpler.

He said: “It shows, as I and others have pointed out, that after an aggressive turnback at IGARI and a high-speed flight over peninsular Malaysia and up the Malacca Strait, the plane disappeared from primary radar and then turned north.

“Some have proposed that this is best explained by the assumption that whoever was in charge of the plane wanted to avoid conflicting traffic on the airway, but that is absurd – there was no conflicting traffic, and anyway it would be very simple to avoid any such hypothetical traffic by flying at a nonstandard altitude.

“A simpler explanation is that they turned to the north because they were heading north.”

Inmarsat defended the data they provided as part of the investigation into the missing plane.

A company spokesman said: “We retain full confidence in the data and the analysis undertaken by the international investigation team, of which Inmarsat was part.”

Inmarsat said just hours after the disappearance (12.11am UTC on March 9 2014) that the last complete ‘handshake’ took place on a radius zone that runs through Cambodia.

A number of theories have sprung up that the plane actually crash-landed in the Cambodian jungle.

Tech expert Ian Wilson believes he has found the location on Google Maps.

He said: “Initially I thought it crashed into the sea. But then there’s the northern and southern corridors.

“When I eventually came across that plane it was surreal, the ahis stood on the back of my neck.”

Another researcher, Daniel Boyer, also believes he has spotted the plane in the Cambodian jungle, having carried out analysis of the the plane’s measurements and compared with satellite images of the area.

However, the Malaysian government said the last handshake may not be the final position of the aircraft.

There is also other evidence that MH370 landed in the Indian Ocean, from debris washed up on the island of Reunion believed to be from the jet.