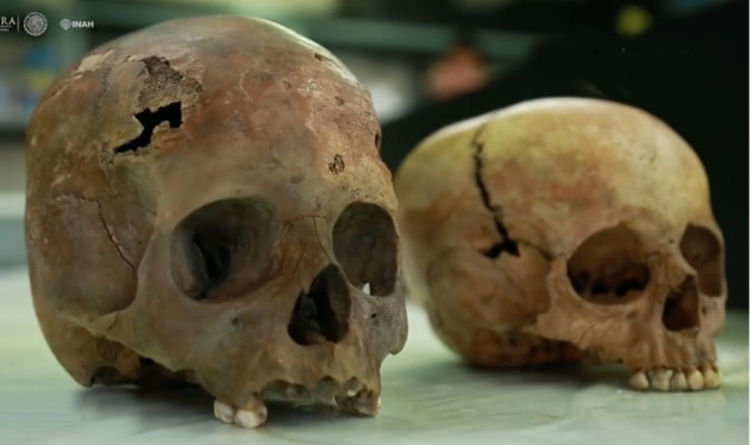 
Archaeologist believe the child may have been sacrificed for the Mexican God of war Huitzilopochtli.

The young boy is believed to have been sacrificed in the late fifteenth century and comes around 12 years after the location of the first child sacrifice was found at the archaeological site.

The child’s bones were reportedly found along with body adornments and symbols characteristic of Huitzilopochtli.

The remains, named ‘Offering 176’, were found under the floor of a square to the west of the Templo Mayor, which was the centre of the ancient city.

The archaeologists point out that in order to offer the remains of the child, the Aztecs had to raise a series of stone slabs from the floor, dig a pit in the ground and build the cylindrical box in which the child was placed with stones of volcanic origin, stuck together with stucco.

One expert told reporters: “Then they filled the square with soil brought from the banks of the old lake to build another square on top of it.”

The discovery comes after hundreds of skulls were recently found in Tenochtitlan that are believed to have been placed on public display in ritual sacrifices.

Tenochtitlan was built on an island in what was then Lake Texcoco in the Valley of Mexico.

The city was the capital of the expanding Aztec Empire in the 15th century until it was captured by the Spanish in 1521.

At its peak, was the largest city in the Pre-Columbian Americas.

A New FRB Signal Has Buzzed Nearly 2,000 Times in Just Two Months, Raising a Mystery : ScienceAlert
Ancient Maya Cities Appear to Have Been Riddled With Mercury Pollution : ScienceAlert
Superconductivity Model With 100,000 Equations Now Contains Just 4 Thanks to AI : ScienceAlert
Amazing New Fossils Provide Earliest Known Traces of The Evolution of Our Jaws And Limbs : ScienceAlert
Watch a Tiny Robot Blob Transform Into Even Tinier Bits to Squeeze Through Cracks : ScienceAlert