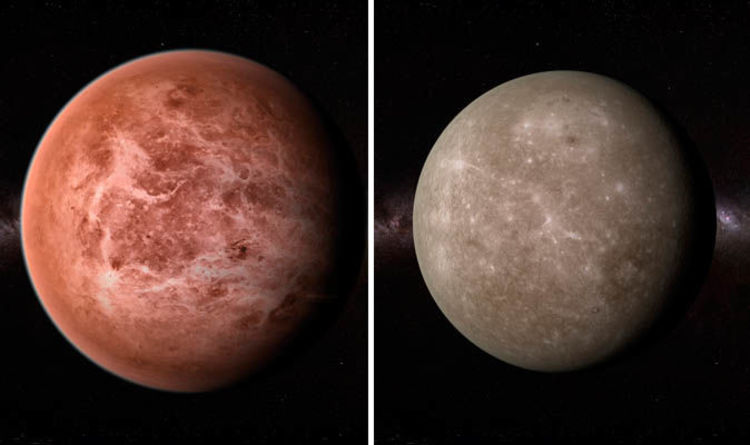 
How to see the Mercy and Venus in conjunction

Mercury is called the most elusive planet as it is the innermost planet in the solar system, whereas Venus is labelled the brightest planet.

The two inner planets will spend the first three weeks of March near to each other in the western evening sky soon after sunset.

Venus and Mercury will remain close together on the sky’s dome during this time – they will be within 5 degrees of each other.

The planets are known as ‘inferior’ as they orbit closer to the Sun than Earth.

They will be less than 1.5 degrees apart from March 2 until March 5, which will be the best time to view the two inner planets.

However the actual conjunction – when Venus and Mercury are near to each other on the sky’s dome – happens on Monday March 5.

The time of the conjunction of Venus and Mercury will happen at 6.30pm GMT.

The two innermost planets will be separated by just 1.1 degrees. Mercury shines at magnitude 1.2, which is nearly as bright as the brightest star in the sky – Sirius.

However this is only half as bright as Venus which will be shining at magnitude 3.9.

Mercury will be situated to the upper right of Venus, you can search for the planets by looking low above the western horizon half an hour after sunset.

The planets will be visible to the naked eye, but binoculars will enhance their visibility against the bright twilight.

However both planets will be too widely separate to fit within the field of view of a telescope.

Mercury will enjoy its best evening apparition this year for people living in northern latitudes on March 15.

The planet will stand 18 degrees almost directly above the setting sun and for eight days entered on this date, Mercury sets just after the end of evening twilight.

The Met Office has said a spells of rain will move north across England and Wales tonight, becoming heavy in places.

Outbreaks of rain and hill snow will continue across northern, central an eastern Scotland and it will become largely dry in the south by morning.