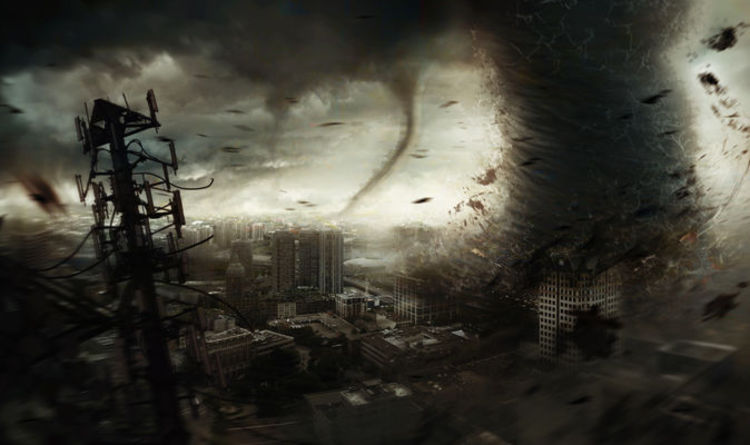 
Millions of Americans were today battening down the hatches for a pummelling from yet another super-storm and the threat of tsunamis – and meteorologists have been warning of the real threat of the so-called hypercanes.

Hypercanes are believed to have all but wiped out life on the planet in the Precambrian era and even contributed to the extinction of the dinosaurs.

In that case the asteroid that hit Earth 66 million years ago is believed to have superheated the sea, triggering extreme hypercanes – hurricanes that stand 25 miles high and stretch all the way into the upper stratosphere.

Hypercanes can create winds that can almost break the sound barrier – 343 metres per second – and if one forms again, humanity itself will be threatened.

While there is overwhelming proof that an asteroid smashed into Chicxulub, Mexico, 66 million years ago, that would not have been enough to wipe out the majority of life worldwide.

Experts believe that something destroyed the ozone layer following the impact, exposing the ancient beasts to deadly radiation from the sun.

An earlier near death extinction has also been blamed on hypercanes – though there trigger is less clear.

Already Hurrincane Michael has escalated into an “extremely dangerous” category 4 hurricane and is expected to strengthen further before making landfall on the US Gulf Coast today. Here are the latest updates as parts of Florida are evacuated and residents are told to prepare for potentially deadly conditions.

Life-threatening flooding, winds, storm surge and rain will lash Florida and Arizona as Hurricane Michael gets ready to hit.

The monster storm is already packing 150mph winds, ahead of making landfall on either the Florida Panhandle or Florida Big Bend area.

And Florida Governor Rick Scott warned people: “THIS IS YOUR LAST CHANCE to evacuate before conditions start deteriorating within the next few hours.”

Previously Dr Kerry Emanuel, of the Massachusetts Institute of Technology, explained his theory of hypercanes.

He said: “In the 1980s I was exploring a theory for the maximum possible intensity for ordinary hurricanes.

“It led to an equation which had a singularity – if you tried to make the water too warm at the surface, the hurricane blows up.

“I thought it might have been because of some assumption I had made along the way, so I worked it out again but it was still there.”

Dr Emanuel says that when water is hot enough, as it would have been near to the asteroid impact, hypercanes are able to form and as they are so tall they can wreak havoc on the ozone layer.

He explains: “What’s interesting is the hypercane core is much higher.

“It pumps water into the upper stratosphere which would create chemical reactions and could destroy the ozone.”

While there is seemingly no danger of an asteroid hitting Earth in the near future, volcanic activity underwater can have a similar affect in heating the ocean.

Worryingly, this is already taking place at the Red Sea.

Dr Emanuel continued: “It has a lot of volcanic activity. The water at the bottom is actually hot enough.

“A burst of volcanic activity could bring that water up to the surface.”

He adds that a hypercane “would not be survivable.

“It would not be a force anyone could withstand – winds approaching supersonic speeds.”