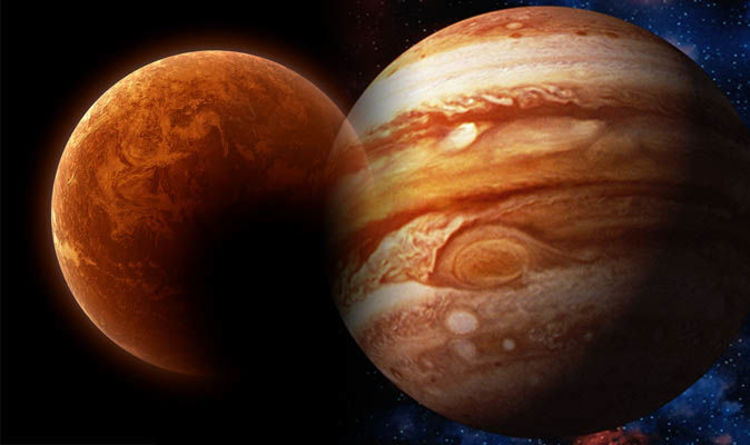 
What is the Mars Jupiter conjunction?

Astronomers are looking forward to one of the closest conjunctions of the year this weekend, when Mars and Jupiter will rise above the horizon on an almost identical path.

The planets will align in the southeastern sky with Mars appearing approximately 0.25 degrees south of its celestial cousin Jupiter.

This is equivalent to about half the Moon’s diameter in the sky.

The conjunction is made possible when the red planet Mars and gaseous Jupiter share the same east to west longitude in the sky.

Despite being more than 342 million miles apart, for a brief period it will appear as if the two planets are orbiting the Sun side by side.

All the planets in our solar system orbit the Sun on almost the same plane, from the point of view of the Earth. This makes it possible for planets to appear so close together.

Mars and Jupiter will rise above the horizon together from 3.16am GMT if you are in London, according to InTheSky.com. Times may vary by a few minutes in other parts of the UK.

This gives skywatchers nearly five hours to enjoy the spectacle before the Sun rises.

Mars and Jupiter rose together in October 2017 but the next conjunction will not be until March 20 2020, so stargazers are advised to make the most of the spectacular views.

The planets will be visible with the naked eye, but they will be close enough to fit within the sights of a telescope or pair of binoculars if you want a clearer view.

Jupiter will be the brightest of the two planets, shining more than 20 times more intensely than Mars.

Experts recommend trying to spot Jupiter, which will be the brightest  starlike object in the sky, before looking through a telescope to capture the planets in the same field of view.

Mars and Jupiter will both be sitting in the constellation Libra.