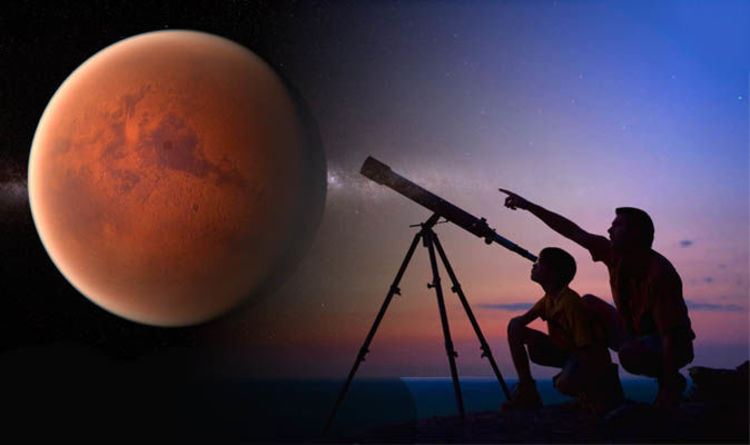 
Stargazers hoping to catch a glimpse of the Red Planet at night are in luck thanks to Mars’ elliptical orbital path.

On July 31, the Red Planet, Earth and the sun will all reach so-called opposition, making Mars light up in the night sky.

Planetary opposition occurs whenever a planet sits directly opposite the sun while reaching its closest orbital point to Earth.

In just over a month, the Martian approach will let sky gazers see the planet with the naked eye.

Space experts at NASA explained: “Like all the planets in our solar system, Earth and Mars orbit the sun.

“But Earth is closer to the sun, and therefore races along its orbit more quickly.

“So sometimes the two planets are on opposite sides of the sun, very far apart, and other times, Earth catches up with its neighbour and passes relatively close to it.”

Mars will reach periphelic-opposition on July 27 and then approach Earth on July 31 at about 8.50am UK time.

Mars’ opposition will mark the planet’s brightest and closest night time appearance since 2003 when Mars was at its closest point in some 60,000 years.

According to Deborah Byrd, founder of EarthSky.org, the appearance of Mars in the sky differs greatly from year to year.

Throughout 2017, the planet appeared relatively faint to the naked eye but things are about to change for the better.

Ms Byrd said: “In late July 2018, around the time Earth sweeps between Mars and the sun, Mars will outshine Jupiter by some 1.8 times. And that will be something to see.”

The problem with observing Mars in the night sky is both planets sometimes feature on the same side of the solar system and sometimes are widely apart.

In 2017 for example, the Red Planet was on the other side of the sun which made it look dim to observers back on Earth.

Mars’ orbit is also more elliptical than that of Earth’s and over the centuries has become increasingly elongated.