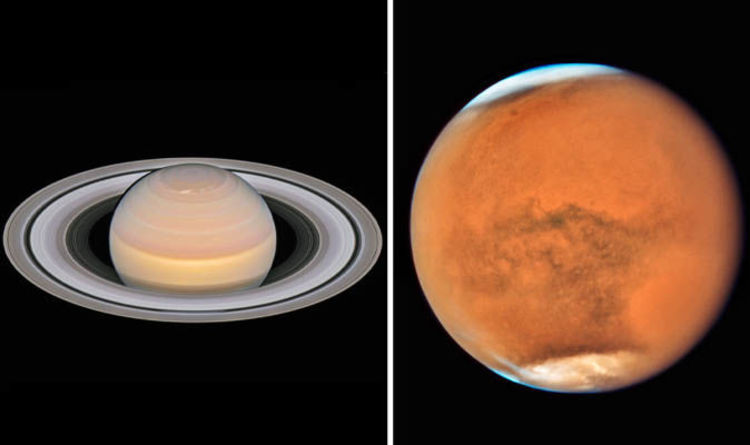 
The two planets lined up with the Earth and the Sun on the celestial spheres at different times this year but both featured brightly in the night sky.

Saturn placed itself directly opposite the Earth on the night of June 27, followed shortly by the Red Planet on Friday, July 27 – the same night of the Blood Moon lunar eclipse.

When a planet reaches opposition, it lines up perfectly with the Sun and the Earth and is fully illuminated by the star at the centre of the solar system.

During this incredible orbital position, the Hubble Space Telescope snapped a series of high-resolution photographs of both planets approaching Earth.

These close observations have helped astronomers make a number of new discoveries about Saturn and Mars, which is currently shrouded by a planet-sized dust storm.

The Hubble images reveal a spectacular view of the Saturn’s rings and the gaps between them, thanks to the planet’s near-maximum till towards Earth.

The photo was snapped when the planet was roughly 870 million miles (1.4 billion km) from the Earth.

The European Space Agency (ESA), which operates the Hubble telescope in collaboration with NASA, said the photos helped uncover a new feature around the North Pole.

The ESA said in a statement: “Alongside a beautiful view of the ring system, Hubble’s new image reveals a hexagonal pattern around the north pole — a stable and persistent wind feature discovered during the flyby of the Voyager 1 space probe in 1981.

“To the south of this feature a string of bright clouds is visible: remnants of a disintegrating storm.”

The Hubble Telescope also managed to snap images of six out of Saturn’s 62 currently known moons.

Those photographed are Dione, Enceladus, Tethys, Janus, Epimetheus, and Mimas.

A second set of photographs was snapped just days before Mars at opposition – the closest approach of the Red Planet since 2003 when Mars was closer to Earth than it ever has in 63,000 years.

The Hubble photos were dominated by the raging Martian dust storm but still managed to reveal views of the planet’s icy polar caps.

Other features captured by Hubble, albeit somewhat blurry due to the ongoing storm, are the Terra Meridiani, the Schiaparelli Crater, and Hellas Basin.

The craters were formed billions of years ago by powerful asteroid impacts in the earliest days of the solar system.

The ESA said: “Comparing these new images of Mars and Saturn with older data gathered by Hubble, other telescopes and even space probes allows astronomers to study how cloud patterns and large scale structures on other planets in our solar system change over time.”

Planet Mars will remain brightly lit in the night skies over the next few days and will actually make its closest approach on July 31.

Experiment Reveals What 1 Hour in Nature Does to The Human Brain : ScienceAlert
We Have Our First Look at Neptune’s Rings in 33 Years, And They’re Glorious : ScienceAlert
Why House Fly Barf Is an Overlooked Potential Vector of Disease : ScienceAlert
There’s Trouble Bubbling Up in Newly Formed Alaskan Lakes, And Scientists Are Worried : ScienceAlert
A New FRB Signal Has Buzzed Nearly 2,000 Times in Just Two Months, Raising a Mystery : ScienceAlert