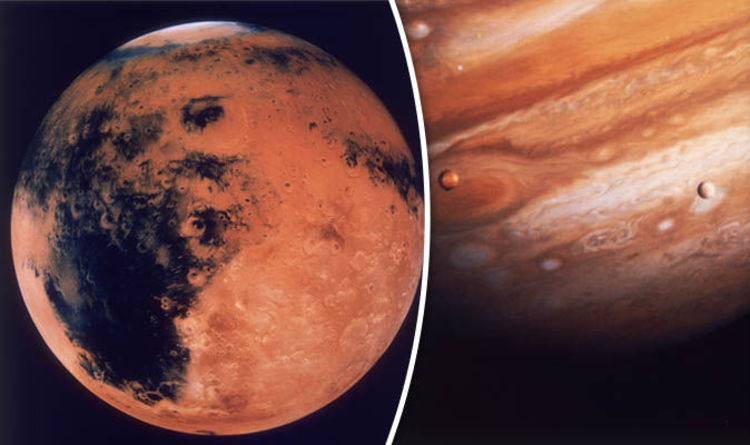 
When is the Mars and Jupiter conjunction?

The conjunction will happen in the southeast sky and the red planet Mars will pass about 0.25 degrees south of the giant planet Jupiter.

The spectacular cosmic encounter has not been seen since October 15 2017 and the next one will not be until March 20 2020, so stargazers are advised to make the most of this amazing event.

In London, the pair of planets will be visible in the dawn sky, rising at 3.16am GMT and reaching an altitude of 22 degrees above the southern horizon before fading from view as dawn breaks at around 7.37am.

Jupiter will be the brighter of the two planets and shines around 20 times more than Mars.

The top tip to view the conjunction is to look for Jupiter, which will be the brightest starlike object in the sky. Also look for the nearby faint red ‘star’ which is actually the red planet Mars.

If you are unable to see Mars with the eye alone then aim binoculars at Jupiter to view Mars. Jupiter and Mars will be in the same binocular field together.

The planet will pass each other shortly after 3.30am GMT but the conjunction can be view in the predawn and dawn sky during Sunday morning.

The sight of two planets so close together is described as a sight to be seen and if you have a telescope you can enjoy the conjunction on another level.

What is a conjunction?

Conjunctions happen when two planets share the same right ascension – the east-west longitude in the sky as measured from an observer on Earth.

The major planets all orbit the sun in nearly the same plane, from the point of view of the Earth, they travel in paths across the sky that are roughly similar.

The conjunction will be best seen in a rural location, away from the pollution of city lights.

The planets will rise so close to each other that they might look like one extremely bright star.

The phenomenon will be visible with the naked eye, but those wanting a clearer view can use a telescope or binoculars.