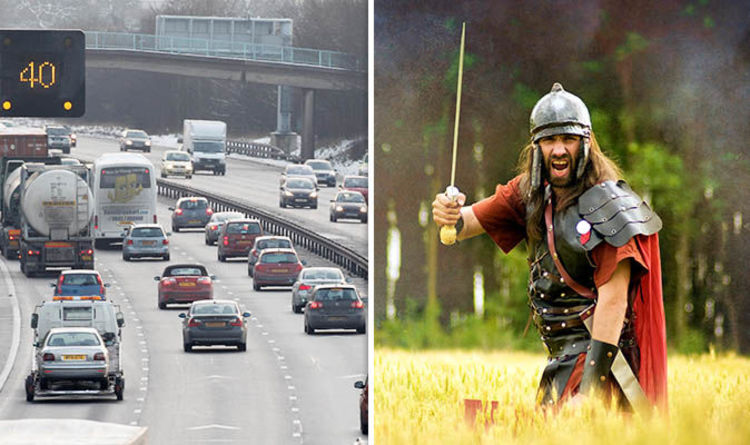 
A series of strange phenomena have been reported by motorists between junction 16 and 19, including phantom lorries, spectral hitchhikers and sightings of legionnaires.

And Mike Brooker says the disturbance caused by a £250million upgrade project could be to blame.

He said a Roman burial ground in the area of the roadworks may have awoken 2,000-year-old spirits which now haunt motorists and cause crashes.

The 53-year-old, from Northwich, has dubbed the area ‘Cheshire’s Bermuda Triangle’ because of the relatively high number of accidents on the “treacherous” stretch of road.

He told ChesireLive: “I personally know people who have lost their lives and families who have been affected by accidents on this stretch of motorway.

“I am leaning towards the theory that it can be connected to Saxon involvement.

“There are reports of a Roman burial ground and that there was an historic clash between Scottish and English armies. There are so many variables and possibilities.

“For decades now, the amount of accidents on the M6 motorway between junctions 17 and 19 is completely unprecedented and, statistically, this is without doubt one of the worst ‘accident black-spots’ on any motorway network in the UK.”

Highways England is upgrading a 20-mile stretch of the M6 which will allow the authority to adjust speed limits in real-time in an effort to ease congestion and make the road safer.

But Mr Brooker warned accidents in the area will continue because the reason behind the accidents is a supernatural one and plans to investigate to uncover the cause.

He said: “There appear to be two principal answers that come up, one is that the motorway was built on a Roman burial site and the other, is that it was the site of the slaughter of a number of the Scottish army dating back over 200 years.

“There is no clear evidence either way to support or substantiate these claims but what is clear is that something is very wrong to cause so many accidents on what is to all intents and purposes and fairly straight stretch of road.

“I ‘personally’ believe there is something supernatural that has attached itself to this particular stretch of motorway… when ‘science’ holds its hands up and is at a complete loss to explain this plethora of accidents/incidents between junctions 17 and 19 of the M6; there is perhaps an alternate explanation.”

The Moon Stole Something From Deep Inside Earth Eons Ago, and Scientists Can Prove It : ScienceAlert
Clinical Trial Restored Sight to 20 People With Corneas Made From An Unlikely Source : ScienceAlert
This Artificial Synapse Can Run a Million Times Faster Than Ones in The Human Brain : ScienceAlert
Record-Breaking Experiment Could Solve a Huge Challenge in Quantum Computing
This Seemingly Simple Foot Feature May’ve Allowed Sauropods to Become Giants : ScienceAlert