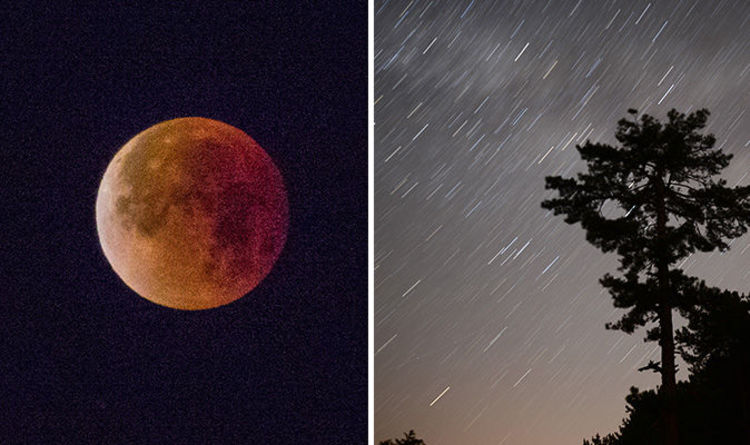 
The longest blood moon of the century is set to grace British skies tonight as the Earth, Sun and Moon perfectly line up.

The lunar eclipse will look like a dark disc slowly moving across the moon’s face before the orb starts to glow red from refracted sunlight.

British forecasters have warned cloudy conditions could limit views in some parts of the country but insisted Britons will still be able to catch a glimpse of the spectacular phenomenon.

BBC Weather forecaster Carol Kirkwood said: “If you are hoping to see the Lunar eclipse tonight, you are going to be lucky because today there’s a fair bit of cloud and a full bit of rain as well and some thunderstorms.

“Perhaps the best chance you have is across parts of Oxfordshire and the far north of Scotland.”

The UK, alongside other European nations including Norway and Sweden, will only see some of the total phase of the blood moon and will miss the partial and penumbral phases.

The July Lunar Eclipse will be the longest to take place in the 21st century, lasting an impressive one hour and 40 minutes starting at 8:35 pm BST tonight.

“As it rises, you’ll see it more and more clearly and then the eclipse finishes at about a quarter past 10pm. It’s just lit by the light that’s filtered through the Earth’s atmosphere which is why it looks this sort of dusty red.

The lunar eclipse will peak out over the horizon at moonrise sometime after 8.30pm BST but the exact moment will differ between cities.

In Brighton, moonrise will not be directly visible until after 8.46pm BST, for example.

Maximum eclipse, when the moon is closest to the centre of the Earth’s shadow, will happen at 9.21pm BST.

The International Dark-Sky Association – a US-based organisation whose purpose is the preservation of nightlight across the world – identified several areas across the UK that would give Britons an optimal view of the Lunar eclipse.

Galloway Forest Dark Sky Park, Sark Dark Sky Island and Exmoor Dark Sky Reserve have all been recognised for their low level of light pollution as the best spots in Britain to catch the rare blood moon.

Stargazers in London will have the opportunity to observe the event on Blackheath with the Flamsteed Astronomy Society.

The Royal Observatory in Greenwich will also be streaming the phenomenon on Facebook.

Watch a Tiny Robot Blob Transform Into Even Tinier Bits to Squeeze Through Cracks : ScienceAlert
A Weird Blob of Hot Gas Is Whizzing Around Sagittarius A* With ‘Mind-Blowing Velocity’ : ScienceAlert
There Are New FDA Safety Warnings About Breast Implants. Here’s What We Know : ScienceAlert
There’s Trouble Bubbling Up in Newly Formed Alaskan Lakes, And Scientists Are Worried : ScienceAlert
Behold, The Epic Last Images Taken by NASA’s Asteroid Redirection Test Spacecraft : ScienceAlert