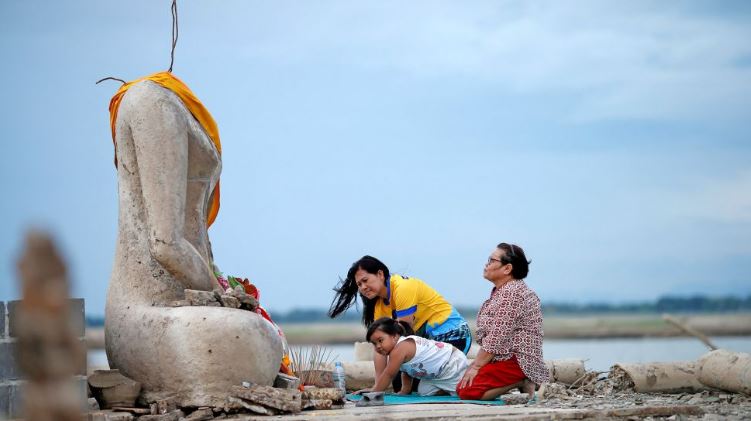 
A long-lost underwater buddhist temple, called Wat Nong Bua Yai, has reemerged in central Thailand, following an extreme drought that is slowly drying up all the region’s reservoirs.

While the temple and the surrounding villages were submerged by the construction of a dam 20 years ago, now, thousands of tourists and pilgrims are visiting the holy spot to pay respect to the ruins.

The reservoir in which sits the temple is nearly dry (just 3% capacity).

Visitors include monks adorning a large headless statue of Buddha with flowers, and former residents of the village who are returning to see the ruins of their old home.

Once a hub of community in the surroundings villages, the buddhist temple was a place for rituals and festivities and a community hangout.

This video below by South China Morning Post clearly exposes the dire situation:

Another drought revealed the remains of Wat Nong Bua Yai once before, in 2015.

Ironically, all this is taking place during what should be the monsoon season or the wettest season of the year in Southeast Asia.

Rice farmers, who rely on reservoirs to flood their paddies, are suffering. In May, when rice planting normally takes place, the Thai government asked these farmers to hold off for rain. It came, but it was too little, too late. Since then, the Thai government has been seeding clouds – releasing chemicals into the air that cause clouds to condense – to generate some rain and allow farmers to continue planting.

No One Likes Commutes, But They May Actually Be Good For Mental Health, Study Finds : ScienceAlert
AI System Detects Strange Signals of Unknown Origin in Radio Data : ScienceAlert
How a Dead Girl in Paris Wound Up With The Most-Kissed Lips in All of History : ScienceAlert
Incredible ‘Fairy’ Robot Sails on The Breeze Like a Floating Dandelion : ScienceAlert
A Lost Interview With The ‘Father of The Big Bang’ Was Just Discovered : ScienceAlert