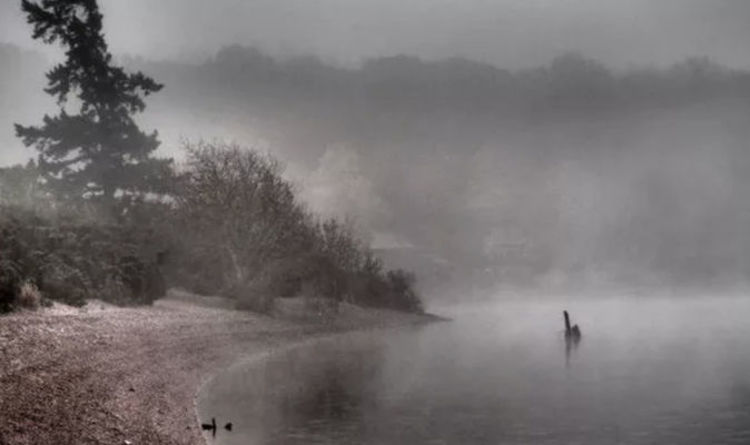 Many tales surrounding the myth of the Loch Ness Monster point to a giant reptile leftover from the Jurassic era or a dragon-like creature. The monster was first spotted in the River Ness in 565 AD, with sightings since then keeping the myth alive.

The most famous image that exists today of the alleged beast is a black and white photograph from 1934 which shows a trunk-like head protruding from the river.

However, a scientific survey of the loch has revealed that the monster is most likely to be a giant eel, according to Ecologist at Edinburgh Napier University, Jason Gilchrist.

Mr Gilchrist wrote in The Conversation that a new technique has allowed scientists to sample all the life in the loch by gathering environmental DNA or e-DNA, as it is commonly known.

He wrote: “This is genetic material that’s present in the cells of organisms and shed into their surrounding environment.

The team of scientists took samples of water from throughout the loch (Image: GETTY)

“Finding and identifying e-DNA can tell scientists what organisms are living in a habitat without them having to observe or capture them.”

The team of scientists took samples of water from throughout the loch and compared them with 36 lochs nearby.

The list of DNA included bacteria, plants and animals.

The study detected over 500million individual organisms and 3,000 species.

Neil Gemmell of University of Otago in New Zealand led the study and confirmed that there are no matches for sharks, catfish or sturgeon, which rules out the possibility of Nessie being an exotic fish.

Sheep, cattle, dogs and even humans were traced among the DNA.

Media has suggested that the monster is likely to be a giant eel which has been backed up by the sampled DNA.

Eel DNA was detected “pretty much every location sampled” in Loch Ness.

However, Mr Gilchrist revealed that the DNA does not necessary confirm that Nessie is a giant eel but there are just a lot of eels in the loch.

Yet, he also suggests that scientists do not have monster DNA to compare with anything they found in the loch, “so no one can say for sure if there is or isn’t a monster there”.

An eel is any ray-finned fish belonging to the order Anguilliformes, of which there are 800 species.

Nessie’s most popular representation is a plesiosaur which is an ancient long-necked marine reptile.

The most famous image that exists today of the alleged beast is a 1934 black and white photograph (Image: GETTY)

However, the huge reptile was wiped out along with the dinosaurs 65 million years ago.

Scottish geologist Hugh Miller found the bones of the first British plesiosaur on the Isle of Eigg, Scotland in 1844.

But according to Mr Gemmell, there is “not a single reptile in our vertebrate data, and nothing that sat in the expected place that a plesiosaur [DNA] sequence might be predicted to lie – somewhere between birds and crocodilians”.

“We can’t find any evidence of a creature that’s remotely related to that in our environmental-DNA sequence data. So, sorry, I don’t think the plesiosaur idea holds up based on the data that we have obtained.”

Satellite Footage Shows The Moment a Las Vegas-Sized Iceberg Broke Off Antarctica
Two Russian Spacecraft Are Trailing a US Spy Satellite. Space Force Is Unimpressed
Scientists Discover Giant Viruses With Features Only Seen Before in Living Cells
UFO sighting: Could this be a ‘UFO fleet’ over an Arizona desert? | Weird | News
The Most Distant World We’ve Ever Explored Just Shed Light on How Planets Are Born