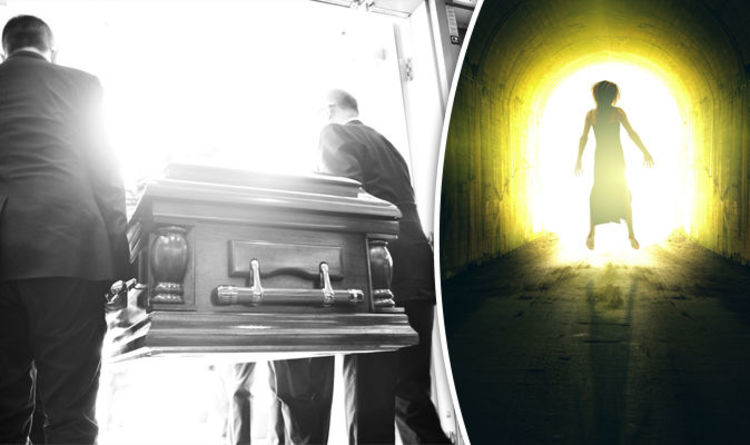 
Joyce Hawkes said she saw a “being of light” which she believes is proof of a God.

When an oak frame from a window fell and smashed her on the head, she was left hospitalised and was briefly considered dead.

The few minutes she was dead lasted for what felt like an eternity, she said.

As soon as the frame hit her on the head, in the winter of 1976, Ms Hawkes said a bright tunnel appeared, which attracted her like a moth to a flame.

So natural was the feeling, Ms Hawkes said she was “not afraid” at all and felt as if the whole ordeal was normal.

The bright tunnel took Ms Hawkes to a luscious field with rolling hills where she saw deceased relatives as if they had been waiting for her.

Speaking to the the Near Death Experience Research Foundation (NDERF) website she said: “Suddenly I was in the presence of a Being of Light. I could not see the face, could communicate, but not in words or pictures even – in some connection of oneness.

“The emotions are always enhanced. I feel joy so deep that my whole self-leaps with gratitude; I feel peace; I feel awe and belonging.

“I did not have a specific life review, but felt everything about my life and me was known, understood and not judged. I was profoundly loved.

“It seemed that I was there forever in the Presence.”

Suddenly, “without discussion or warning”, Ms Hawkes was rushed back to her body where she awoke in a bed.

Experiences like Ms Hawkes’ are not uncommon and researchers believe they could have an explanation.

This Artificial Synapse Can Run a Million Times Faster Than Ones in The Human Brain : ScienceAlert
Robot Shows It’s Possible to Swim Through The Emptiness of a Curved Universe : ScienceAlert
A Common ‘Forever Chemical’ Has Just Been Linked to Liver Cancer in Humans : ScienceAlert
Scientists Gave Young Mice The Blood of Old Mice. Then Things Got Weird : ScienceAlert
Plants Have Been Keeping a Secret From Us About How Thirsty They Actually Are : ScienceAlert