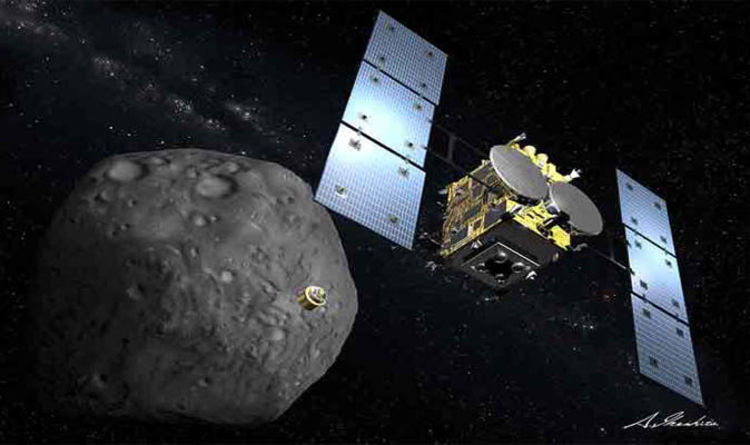 
The Hayabusa-2 probe rendezvoused with the barrelling space rock earlier this year in June after a three-and-a-half-year trip through space.

The Japanese probe will now deploy robotic landers to the surface of Ryugu on two separate dates.

Officials in Japan have announced Hayabusa-2 will deploy its first set of remote robots on September 21.

Thereafter the spacecraft will release a second lander, dubbed MASCOT, on October 3.

Hayabusa-2’s official mission Twitter account posted: “The spacecraft is currently operating in BOX-B. On August 23, we announced to the media that the point denoted ‘L08’ near the asteroid equator had been selected as the candidate site for the touchdown of Hayabusa-2.

“However, the surface of Ryugu is covered with boulders, so we need to continue gathering and considering information so that we can touchdown safely.

“The MINERVA-II-1 and MASCOT lander decided to land at mid-latitude sites, N6 and MA-9.

“MINERA-II-1 separation is scheduled for September 21, and MASCOT on October 3.”

Asteroid Ryugu is a 3,278ft-wide (1km) space rock from the earliest days of the solar system.

If Hayabusa-2 successfully deploys its landers on the space rock next month, the mission will mark the first ever spacecraft to position data gathering landers on an asteroid.

The first leg of the mission saw Hayabusa-2 launch from the Tanegashima Launch Center, Japan, on December 3, 2014.

Now the spacecraft is preparing to deploy a pair of robots, dubbed Rover 1A and Rover 1B, to the asteroid’s surface.

Unlike the familiar Martian rovers deployed by NASA, the Japanese robots will “hop” around the space rock without the need for wheels.

Ryugu’s low gravity will help the hoppers navigate the bumpy surface with ease.

Each robot is fitted with an array of different cameras to beam back photos of the asteroid back to the Hayabusa-2 mothership.

The ultimate goal of the mission is to better understand the early formation of the solar system as we know it today.

Mission control tweeted: “We are looking forward to seeing what kind of data these will collect.”

Hayabusa-2’s predecessor, the Hayabusa spacecraft, was the second ever space probe to successfully land on a speeding asteroid.

The spacecraft landed on asteroid Itokawa, a Near-Earth Object (NEO) on November 25, 2005.

This Seemingly Simple Foot Feature May’ve Allowed Sauropods to Become Giants : ScienceAlert
Researchers in South America Discover a New Species of Tiny but Tough Dinosaurs : ScienceAlert
Clinical Trial Restored Sight to 20 People With Corneas Made From An Unlikely Source : ScienceAlert
A Common ‘Forever Chemical’ Has Just Been Linked to Liver Cancer in Humans : ScienceAlert
Thinking Hard and Long Can Cause Brain Drain : ScienceAlert