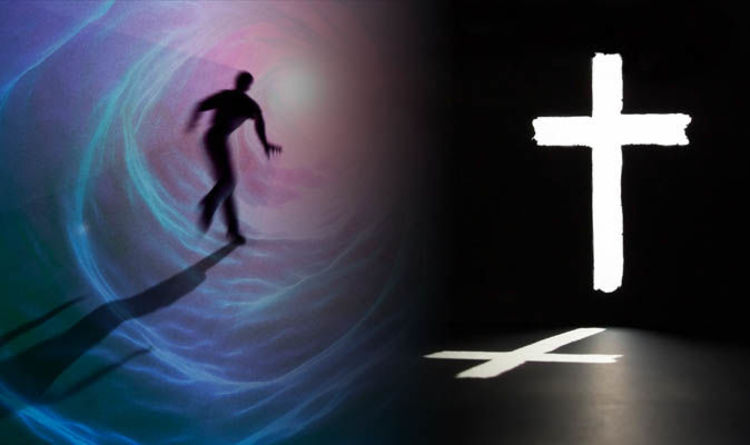 The man, who shared his name as Douglas B, may have stood before the pearly gates after a surgical procedure pushed him to the brink of death in December 2017.

Douglas believes he suffered clinical death after an Endoscopic Retrograde Cholangio-Pancreatography (ERCP) examination of his intestines.

He claims to have been pulled into a warm and comforting light where Biblical scripture flashed before his eyes like the end credits of a movie.

He shared his incredible story with the Near Death Experience Research Foundation (NDERF) – a group cataloguing near-death experiences (NDEs).

Before he drifted out of consciousness he said he was praying for his life, asking Jesus to “be with him” through the ordeal.

He then remembers waking up “someplace else” where he was surrounded by light, without pain or discomfort.

Douglas said: “There was light all around me. It was not especially bright or coming from any one place.

Life after death: A man claims to have seen scripture and light after dying (Image: GETTY)

“The light was just everywhere around me. There was no glare, but the light illuminated everything without shadows.

“All around me I felt a strong, yet calm, reassuring presence.”

Douglas said before his eyes he could see moving text which he later recognised to be the Gospel of John from the Christian Bible.

The man said the scripture moved before his eyes like the moving end credits of a film and voice was reading them out.

He said: “As the scripture scrolled upwards I could hear, and feel, a voice reading the words aloud.


There was light all around me

“I also had the feeling but never heard it read, that all the events of my life had been read and were known.

“Throughout this reading, I felt no fear or uncertainty. I felt a complete sense of calm, as I heard in my mind, and saw the words passing before me.”

Following his supposed NDE, Douglas said he was woken up in the hospital’s recovery area, where he was being resuscitated.

But could Douglas’ experience of the afterlife be a genuine memory of heaven?

The secrets of the afterlife are a hotly contested topic by religious and scientific figureheads alike.

Most scientists agree patients who suffered cardiac arrest in hospitals, mistake the bustle around them for visions of the afterlife, light at the end of a tunnel and otherworldly voices.

Life after death: Many scientists question the validity of these claims (Image: GETTY)

He said: “We know that people’s cultural beliefs influence how they interpret their perceptions. We see what we expect.

“One truck driver who I interviewed talked about entering a tailpipe, so you have to use whatever cultural metaphors are at your disposal to describe the phenomenon.”

NDEs in the Western world most commonly refer to patients escaping their bodies, being surrounded by warm lights or seeing the ghosts of their past relatives.