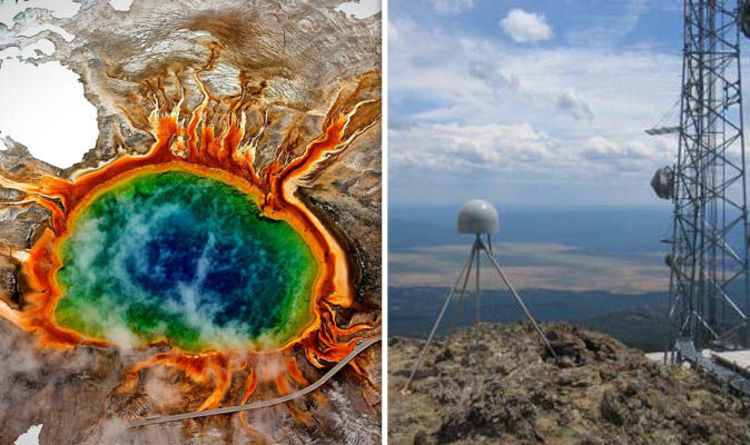 
The United States Geological Survey (USGS) confirmed none of its instruments at Sawtell Peak station P361 are transmitting data.

GPS station P361 is a crucial element of the USGS’ network of trackers near active Yellowstone volcano faults.

The instruments at P361 are located at an “important site” about 18.64 miles (30km) west of the Yellowstone National Park border in Idaho.

Geologists at the USGS use a network of GPS stations around the supervolcano to measure the ground for signs of ground deformation.

The stations pick up warning signs of Yellowstone earthquakes and the immense volcanic pressures that cause them.

Station P361 is of particular importance to the USGS because it relays data to additional GPS arrays nearby.

The USGS believes the station lost its GPS and communication antennas in an intense electrical storm.

Most of the sensitive equipment at the station will have to be replaced high up on its communications tower.

“This is an important site, not only because it is located close to active faults in the Yellowstone region, but also because it serves as a data relay for four additional nearby GPS stations.

“None of the GPS equipment is transmitting data.”

Other stations in the area are believed to have also been affected by lightning strikes.

The USGS said parts of the boreal geophysics station near the world-famous Norris Geyser Basin, dubbed B205, suffered permanent damage.

Unlike GPS stations, which are positioned high above the ground, borehole stations are drilled deep down into the ground, as deep as 770ft (200m).

At the B205 station, the USGS said only one out of its three sensitive tiltmeter instruments were replaceable.

Maintaining these stations is a constant fight against the elements, power failures and “other ailments”.

The USGS said: “Every year, several GPS stations in the 1,100-station Plate Boundary Observatory, of which the network at Yellowstone is a part, are damaged by lightning.

“Locations that are good for GPS stations have clear sky view.

“High points are especially attractive, as they allow for easier data transfer – so it’s no surprise that these stations are also in danger of being struck.”

Maintaining the USGS stations fall under the responsibility of UNAVCO – a non-profit university-governed consortium located in Boulder, Colorado.

Researchers in South America Discover a New Species of Tiny but Tough Dinosaurs : ScienceAlert
Thinking Hard and Long Can Cause Brain Drain : ScienceAlert
Deep-Sea Sponges Can ‘sneeze’ Out Mucus, and The Footage Is Weirdly Mesmerizing : ScienceAlert
Robot Shows It’s Possible to Swim Through The Emptiness of a Curved Universe : ScienceAlert
This Seemingly Simple Foot Feature May’ve Allowed Sauropods to Become Giants : ScienceAlert