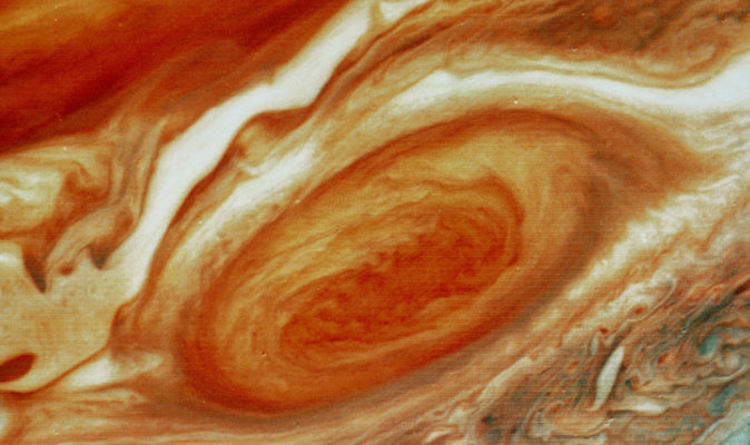 
A storm known as the Great Red Spot (GRS) which was first discovered in 1655 is finally coming to the end of its life and experts believe it will stop raging within 20 years.

Scientists at NASA were afforded an unprecedented look at the massive crimson-coloured storm system last year when the Juno spacecraft – which is currently orbiting Jupiter, dubbed the ‘King of the Solar System’ because of its immense size which is 11 times the diameter of Earth – flew past.

The probe found that the temperature was around 1500 degrees celsius in the middle of the GRS.

Within the storm are hurricane systems swirling gases at 425 miles per hour, which can take up to six days to complete a revolution due to its vast size.

The red spot produces “acoustic waves” of energy that vibrate in the direction in which they are travelling, causing the atmosphere to heat tremendously.

While it is unclear what has kept the storm going for the best part of four centuries, scientists believe that it is essentially re-powering itself thanks to the energy created from the heat.

“In truth, the GRS has been shrinking for a long time.

“The GRS will in a decade or two become the GRC (Great Red Circle). Maybe sometime after that the GRM — the Great Red Memory.”

This Species of Carnivorous Plant Evolved Into a Toilet And Is Now Winning at Life : ScienceAlert
An Iceberg The Size of London Has Broken Free From Antarctica Ice Shelf : ScienceAlert
People Who Don’t Exist Look More Real Than Actual People, Study Finds : ScienceAlert
An Expert Explains Why The Radioactive Water Stored at Fukushima Should Be Released : ScienceAlert
Scans of Mummified ‘Golden Boy’ Reveal He Was Covered in Magical Protections : ScienceAlert