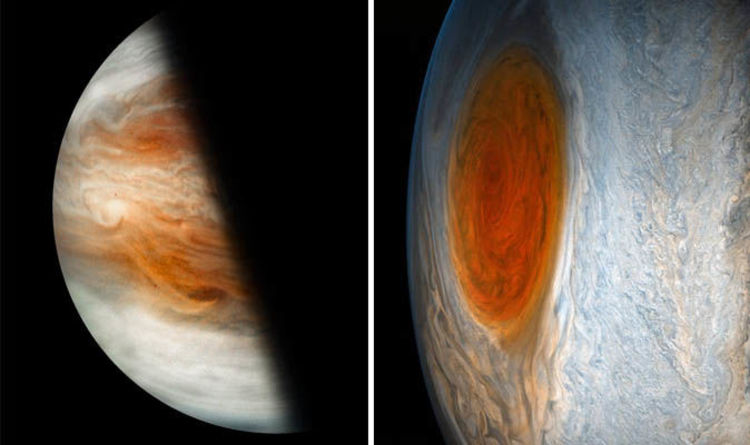 
The so-called Great Red Spot (GRS), a violent swirl of crimson red on Jupiter’s surface, will likely die in the next 10 to 20 years.

Jupiter’s iconic Red Spot was first picked up by telescoped hundred’s of years ago, but its origin still remains a mystery to astronomers.

Scientists who have spent a lifetime studying the storm have now come to the unfortunate discovery that it appears to be shrinking.

At the height of its glory in the 1800s, the mesmerising swirl of churning gas with winds of up to 400mph, was four times the size of Earth.

But the Red Spot now looks to be only 1.3 times the size of Earth, and Juno mission planetary scientist Glenn Orton conceded that “nothing lasts forever”.

And if the Red Spot dies out in the coming years, then these NASA pictures of the storm might be the only remaining evidence of its existence.

Mr Orton said: “In truth, the GRS has been shrinking for a long time.

“The GRS will in a decade or two become the GRC (Great Red Circle).

“Maybe sometime after that the GRM — the Great Red Memory.”

Scientists at NASA have been studying the Red Spot for years thanks to the deep space Juno spacecraft, which is still orbiting the gas giant.

Earlier in July 2017, the space probe flew approached within 9,000 km above the 16,000km-wide storm, giving NASA a chance to photograph the storm in its full splendour.

Juno will once again pass over the storm in April this year, though it will not pass as close this time.

Scott Bolton, Juno principal investigator from the Southwest Research Institute in San Antonio, said at the time: “For hundreds of years scientists have been observing, wondering and theorising about Jupiter’s Great Red Spot.

“Now we have the best pictures ever of this iconic storm.

“It will take us some time to analyse all the data from not only JunoCam, but Juno’s eight science instruments, to shed some new light on the past, present and future of the Great Red Spot.”

Jupiter is a monstrous gas planet, biggest in the solar system and fifth from the sun.

Its violent atmosphere is a lethal combination of hydrogen and helium, encompassing a liquid core of hydrogen with no solid landmass in sight.

The first signs of the Red Spot were observed in 1665 and the storm has been churning away ever since.

Astronomy amateurs and space boffins interested in tracking the Red Spot’s last moments before it dissipates can aid NASA by extracting hidden amounts of stunning detail and information in raw images of the planet.

Photo files beamed back by Juno can be found here.

Each hand-processed imaged selected by NASA aids the American space agency in its study of the solar system’s secrets.