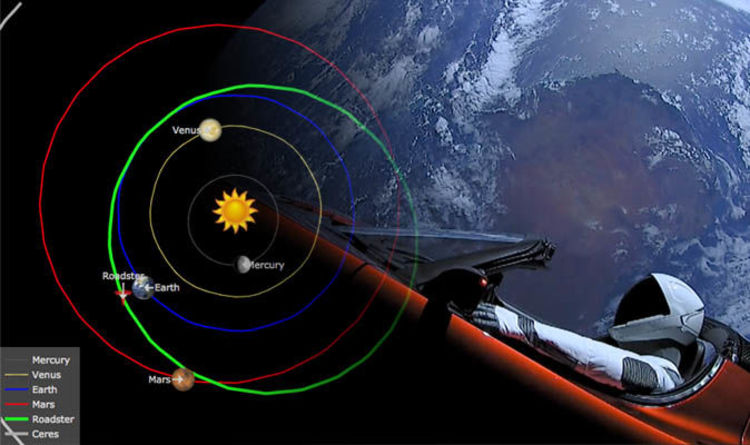 The Roadster will hit several key milestones on its unprecedented journey of the solar system after it slingshots away from Earth towards Mars later this year.

Not only is it the first car in space, but the Roadster will be the first to pass Mars, to pass the asteroid belt and to pass the sun.

Elon Musks’s cherry-red electric car is currently flying hundreds of thousands of miles away from Earth and will soon depart from the planet’s orbit.

You can now track Starman’s incredible journey across the stars thanks to the dedication of space enthusiast Ben Pearson, who created the WhereIsRoadster.com Roadster tracker.

WhereIsRoadster.com tracks Starman’s position in real time, based on the car’s calculated trajectory as it swings around the sun for millions of years to come.

Mr Pearson meticulously charted out Starman’s position in the solar system with the help of data from NASA’s Pasadena-based Jet Propulsion Laboratory (JPL) and the Horizons ephemeris service.

The tracker’s creator said: “The current data that I am using comes from JPL Horizons. I am very thankful for this wonderful resource they have provided.

“I now have a script that I run periodically to update the information files that I have, which will allow for me to track this object, to the best of human understanding, for some time to come.

“This information will eventually expire, no longer being useful.”

According to the tracker, the car will head out towards Mars’ orbit around April this year.


The current data that I am using comes from JPL Horizons. I am very thankful for this wonderful resource they have provided


The Tesla Roadster blasted off onboard the SpaceX Falcon Heavy rocket on February 6.

Several months ago, Mr Musk pledged to put the expensive sports car on a “billion year Mars orbit” in a bid to make the Falcon Heavy’s maiden launch more special.

In the post-launch briefing, the South African billionaire said: “I’m still trying to absorb everything that happened. It seemed surreal to me. 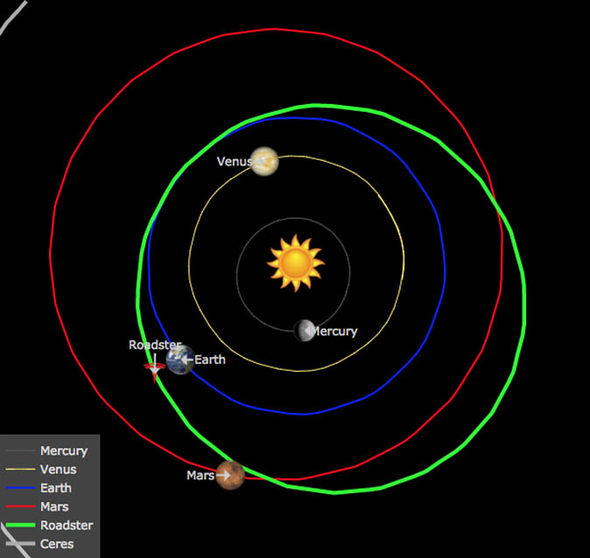 SpaceX Tesla Roadster: The speeding car will fly towards the asteroid belt before hooking back

“I had this image of an explosion on the pad, a wheel bouncing down the road, and the logo landing somewhere—but fortunately, that didn’t happen.”

Space boffins are now expecting the Roadster to sail on solar winds for millions and millions of years without stumbling upon obstacles.

A trio of researchers from around the globe published their findings in their research paper, titled “The random walk of cars and their collision probabilities with planets”.

According to scientists Hanno Rein, Daniel Tamayo and David Vokrouhlicky, there is a minimal chance of Starman ever crash landing back on Earth or on Mars.

Mr Rein, from the University of Toronto, said: “We’ve not seen any single collision with Mars in 240 simulations, though we continue to run them and see what happens.

“The likely outcome is that it will crash, in tens of millions of years, into Earth or Venus or the Sun.”

The odds of Starman perishing in a fatal collision are minimal – only about 6 percent for Earth and 2.5 percent for Venus.