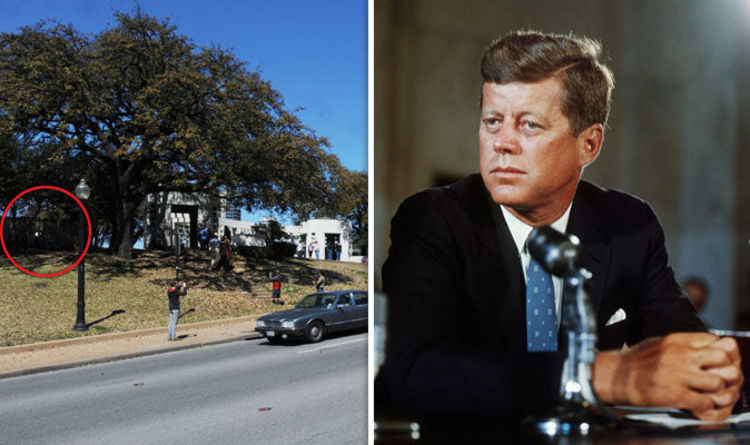 
The 35th President of the United States was shot dead in Dallas, Texas, US, on November 22, 1963. Both the FBI and the Warren Commission officially concluded that Lee Harvey Oswald acted alone, shooting the 46-year-old as his motorcade made its way down Dealey Plaza. However, evidence from a House Select Committee on assassinations revealed a recording captured by a police officer’s microphone stuck on the ”open” position.

“In 1979 a special committee of the US House of Representatives declared that although the President had undoubtedly been shot by Oswald, acoustic analysis suggested the presence of a second gunman who missed,” it was revealed on Amazon Prime’s “Dark Legacy” documentary.

The recording was made from Dallas Police Radio Channel 1, which carried routine police radio traffic.

In the audio clip, which starts a minute before the murder, four shots can be heard.

Investigators compared “impulse patterns” from a Carcano rifle fired from the sixth floor of the Texas School Book Depository and also from a stockade fence on the grassy knoll forward and to the right of the location of the President’s limousine.

Acoustics analysts experts Mark Weiss and Ernest Aschkenasy of Queens College later reviewed the data and concluded: “With the probability of 95% or better, there was indeed a shot fired from the grassy knoll.”

However, a year later, the FBI’s Technical Services Division studied the acoustical data and issued a report.

They concluded the audio unsuccessfully proved the presence of a second gunman.

The agents also claimed the audio was not from a police officer in Dealey Plaza, but actually, a dictaphone recording made more than 1,000 miles away in Greensboro, North Carolina in 1979.

As a result, the evidence was discredited.

Earth’s Oxygen Came From an Unexpectedly Deep And Hot Source, Study Suggests : ScienceAlert
Mummies With Golden Tongues Discovered in Ancient Egyptian Necropolis : ScienceAlert
A Tobacco Plant Has Been Engineered to Produce Cocaine in Its Leaves : ScienceAlert
Forests at Risk of Burning an Extra 30 Days a Year Without Climate Action : ScienceAlert
Mysterious Tendrils Inside The Brain May Control Our Perception of Time : ScienceAlert