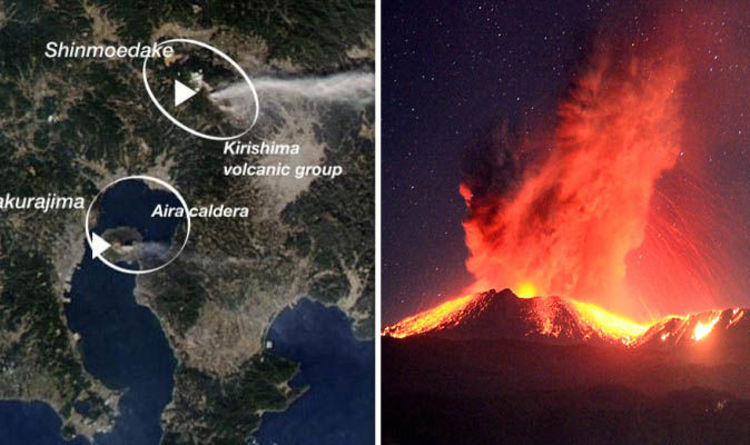 
A team of US scientists have observed unusual volcano activity connecting the 2011 eruption of Kirishima, or Mount Shinmoedake, to a volcano 13.7 miles away.

The researchers from the University of Miami (UM) and Florida International University believe changes seen in one of the volcanoes were a direct result of the other erupting.

By analysing data from 32 permanent GPS stations in the volatile Ring of Fire region, the scientists studied the danger of volcanoes triggering distant eruptions.

Prior to the 2011 eruption of Shinmoedake, the neighbouring Aira caldera of Mount Sakurajima spent almost two decades steadily inflating.

The volcano stopped after Shinmoedake went off which was initially assumed to be a sign of the volcano finally calming down.

But scientists were stunned to see the Aira caldera of Sakurajima balloon once again after Shinmoedake’s eruptions subsided.

The study published in the journal Scientific Reports now claims the unusual behaviour is evidence of a direct, subterranean link between the two fiery mountains.

Elodie Brothelande, a postdoctoral researcher at UM, said: “We observed a radical change in the behaviour of Aira before and after the eruption of its neighbour Kirishima.

“The only way to explain this interaction is the existence of a connection between the two plumbing systems of the volcanoes at depths.”

The volcano study claimed the eruption of Shinmoedake reopened an ancient magma pathway linking the two volcanoes which has remained shut for some 300 years.

Prior geological studies of volcanoes have shown such connections can exist between volcanoes.

But the US researchers believe they are the first to finally have the evidence to prove they are real.

The study’s findings could be greatly beneficial towards helping volcanologists better understand and predict volcano behaviour.

The study reads: “Identifying volcano interaction mechanisms is critical to determine if and how an eruption can influence the activity within a given area.

“We have shown that large volcanic systems such as Aira caldera can respond to small eruptions at nearby volcanoes fed from a common deep reservoir.”

Japan sits in a volatile part of the Pacific Ocean known as the Ring of Fire.

The Ring of Fire is a chain of intense volcanic and earthquake hotspots running around the rim of the Pacific Ocean.

About 90 percent of the world’s earthquakes strike along the Ring of Fire.

More than 75 percent of the world’s active volcanoes sit in this area – out of which more than 100 are in Japan.