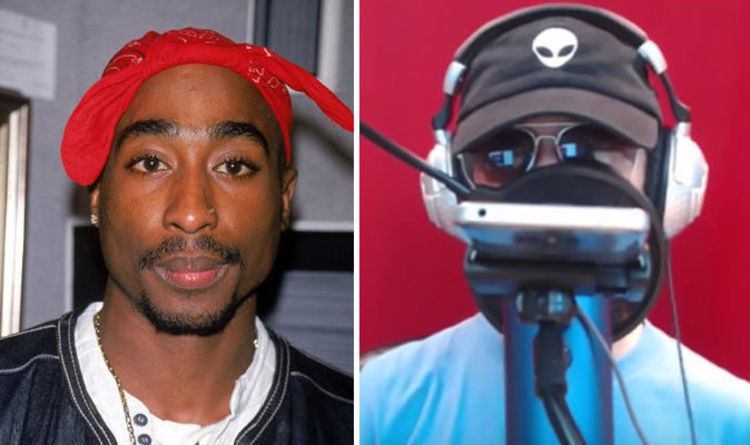 
In the latest episode of conspiracy Youtube channel Apex TV, Noah, who claims to be from the year 2030, was answering questions during a live stream.

He was asked if any celebrities had faked their death and come out later.

Noah said he had experience with a secret society which is the equivalent of the “Illuminati” – which is a conspiracy theory that a powerful, secret organisation controls the entire world through infiltrating the media and brainwashing everybody.

He said: “I’ve had an experience with the Illuminati, although it doesn’t exist, there is something similar.

“It isn’t called the Illuminati and it doesn’t have a symbol with the eye.

“But what we do have is a different version of the Illuminati in the government, the actual symbol is an owl.

“When I was in the future I was able to figure out that Tupac isn’t dead but he was in a critical state for about a year after his ‘death’.”

Tupac is one of the best-selling music artists of all time having sold 75million records worldwide.

He was shot in 1996 after attending a Mike Tyson boxing match.

His body was cremated the next day and some of his ashes were said to have been mixed with marijuana and smoked by members of his hip-hop group, the Outlawz.

But in the surreal video Noah says this is not the true story.

The interviewer asked how the “time traveller” knows this if it wasn’t in the public domain.

He replied: “Well basically when I went back to the year 2030 I was able to figure out by a bunch of people that were involved in the same area I’m in.

“They were able to tell me that Tupac was critically injured for a couple of months after his supposed death.

“People affiliated with Tupac told me this. And the reason why this happened is because his friends that were rapping were involved with the Illuminati.

“They got him involved in the Illuminati, or secret society, they tried getting Tupac in there but he refused.

“He didn’t tell them if he was going to say anything about it or not, but they take things to the extreme.”

Noah went on to claim the secret society didn’t intend to kill him but just keep him away from the public.

But he says he does not know how that happened and he didn’t “ask further”.

While a lot of people commented on the video with positive feedback, some people were less than convinced by the supposed time traveller’s statements.

One said: “I’ve got a question: Where did you do your acting lessons?

And a third said: “Only in America. Your whole continent is insane.”

A New FRB Signal Has Buzzed Nearly 2,000 Times in Just Two Months, Raising a Mystery : ScienceAlert
One of The World’s Largest Organisms Is Disintegrating. Here’s How We Might Save It. : ScienceAlert
This Is How Much Fossil Fuel The World Is Sitting on, And It’s a Time Bomb : ScienceAlert
Experiment Reveals What 1 Hour in Nature Does to The Human Brain : ScienceAlert
Termites Love Global Warming So Much That They May Make It Worse, Says Study : ScienceAlert