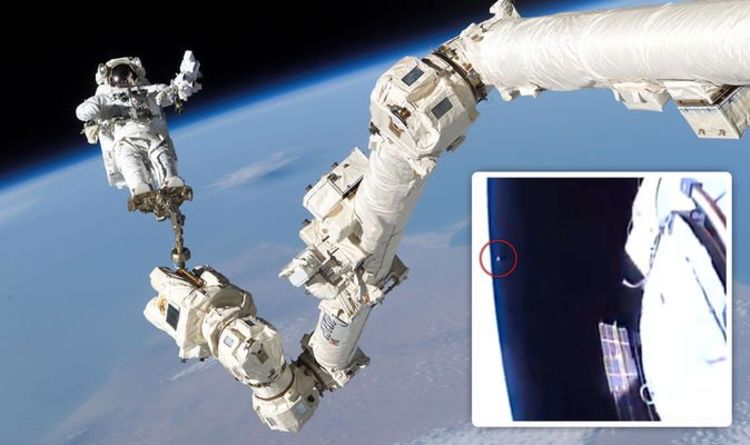 Today, Christina Koch and Anne McClain were scheduled to perform the first all-female spacewalk together on the ISS. NASA cancelled the plan last minute though, due to a lack of spacesuits of the right sizes, replacing Ms McClain with Nick Hague, in a move that has sparked controversy. After the event, a number of conspiracy theories have emerged surrounding the ISS Spacewalk mission.

Eagled-eyed viewers watching the live stream noticed something bizarre floating around behind Mr Hague as he worked on the space station.

It was quickly shared online by popular conspiracy channel Secureteam10, where presenter Tyler Glockner wildly claimed he thought it could be a UFO.

He said: “This is yet another example of NASA cutting the live feed after a UFO was spotted while one of the astronauts is out doing their spacewalk.

“You’ll notice for the good portion of the video there is no UFO.

The strange object hurtled past the ISS (Image: YOUTUBE)

The astronaut was working on the ISS (Image: YOUTUBE)

“The UFO appears just above the Earth’s horizon line and I want you guys to notice that, up until the UFO appears, the video feed is pretty stable.

“I want you guys to watch here, right as the UFO appears you’ll notice the live feed get more and moe interference until they finally decide to cut it.”

He went on to reveal how the live feed was then cut, claiming the astronaut was not aware a UFO had come into shot.

He added: “Here’s the point the UFO actually comes into view and you’ll notice the interference ramping up.

“Then finally the feed cuts.

The camera panned roung behind the astronaut (Image: YOUTUBE)

A strange anomaly appeared in the background (Image: YOUTUBE)

“Oddly enough, it incidentally happens right as the UFO comes in to view.

“Either the astronaut doesn’t see it, or there is a delay in communication, so they just cut the feed.”

Bizarrely, this incident is not the first of its kind.

On March 15, the Soyuz spacecraft successfully reached the ISS, but the journey was shrouded in conspiracy.

Three days before the spacecraft reached the ISS, an unidentified object was seen flying below the space station.

Moving from left to right, at some pace, it appeared to have a red glow to it.

It was quickly shared on YouTube, where the uploader questioned if it could be a UFO or satellite.

However, there has been no official confirmation.

Before that, Mission Control was left baffled by a strange anomaly during the STS-106 mission in September 2000.

A similar incident occured during the Soyuz mission (Image: GETTY)

During a pass-by of Chicago, two bright objects were seen flying across the screen, which appeared to startle the flight controller back at Mission Control in Houston.

He said: “Atlantis is approaching sunrise as it passes the Great Lakes area.

“There’s a, there’s a view of Chicago and some, uh, ice crystals, or other items being illuminated by the rising sun.

“Atlantis now moving into the sunrise, in just about the next minute or so.

“As that occurs ice crystals that come off the shuttle becomes illuminated.”

The bizarre event left conspiracy theorists, including Jeff Challender, convinced NASA had just captured something they should not have.

During Amazon Prime’s “Secret Space”, he revealed his view on how the event went down.

He said in 2017: “Just as the shuttle was passing over Chicago, two unusual objects were seen flying below.

“The first object appeared smaller and further away, but the second was very bright and moved at speed.

“Mission Control tried to zoom in and follow its progress until it was out of sight.

The ISS is a low-Earth orbit satellite (Image: GETTY)

“Or perhaps they realised that the video goes out to the public.”

Mr Challender then went on to reveal why he believed the anomalies were not ice crystals.

He added: “The anomalies are not ice crystals sparkling in the sun.

“The announcer even said the sun will rise in a few minutes, this proves the objects were self-luminous.

“Good one, ice in the rising sun when the sun hasn’t even risen yet.”

The First People to Settle in The Americas Brought Their Dogs With Them
Archaeologists in Turkey Have Discovered a Mysterious Ancient Kingdom Lost in History
A Physicist Has Worked Out The Math That Makes ‘Paradox-Free’ Time Travel Plausible
Unusual Wasp Partnerships Help Non-Native Figs to Thrive in Hawaii
A New Method Has Been Enlisted to Help Save Elephants, And It Involves Space