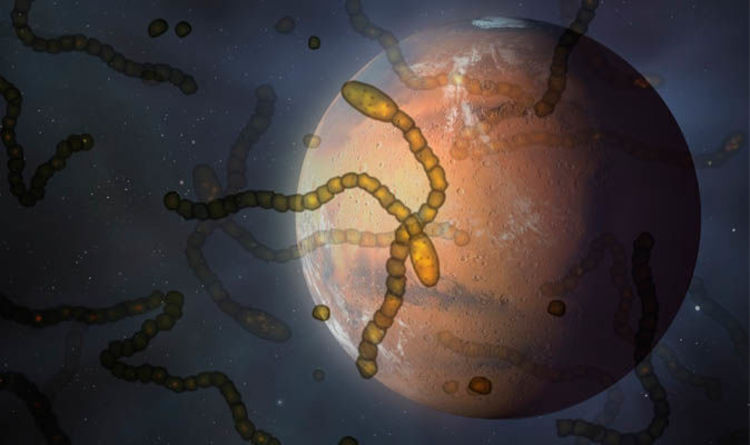 
The two landers carried out a series of experiments on the surface designed to detect microbial biosignatures.

The mission’s results were both inconclusive and controversial, sparking widespread debate about the validity of the findings.

More than 40 years after the mission was carried out scientists still cannot agree on what exactly was found on Mars.

In 1977, the NASA expert concluded the experiment had detected evidence of life on Mars when a soil sample tested positive for metabolising.

Appearing on Dr David Livingston’s online The Space Show, Dr Levin criticised NASA for not following up on the Viking missions.

He said: “I am certain NASA knows there is life on Mars.”

The Viking experiments were controversial because they produced contradicting sets of results in related experiments.

The LR test initially found evidence of metabolism in the soil but a second experiment found no traces of organic material.

Scientists argued metabolism could not occur without organic material.

Dr Levin has now urged NASA to reconsider Viking’s findings alongside the 40 years worth of data gathered since 1976.

The space expert stressed there is “substantial and circumstantial evidence” to prove life does exist on Mars.

The incredible discovery boasted NASA’s confidence in the hunt for extraterrestrial life on Mars.

Dr Levin argued there are other compelling signs to support the theory, such as the seasonal spikes of methane on Mars.

Roughly 90 percent of the methane on Earth is produced by living organisms such as cows and microbes.

The Mars expert said this is evidence that cannot be ignored but atmospheric methane is also produced by the interaction of water and rock.

NASA itself concluded in June the present evidence suggests Mars was once abundant in liquid water – a crucial building block of life.

Last month, ex-NASA chief Ellen Stofan told the US Senate she is ‘optimistic’ simple life forms did evolve on Mars in the distant pass.

She argued it will take humans returning to Mars to dig through layers and layers of Martian soil and rock to prove this.

Astrobiologist Chris McKay, of NASA’s Ames Research Center, also said: “We cannot rule out that Gil Levin is correct and that there are dormant life-form in the Martian soil.”

For the most part, however, scientists agree the Viking landers did not detect alien life on Mars 40 years ago.