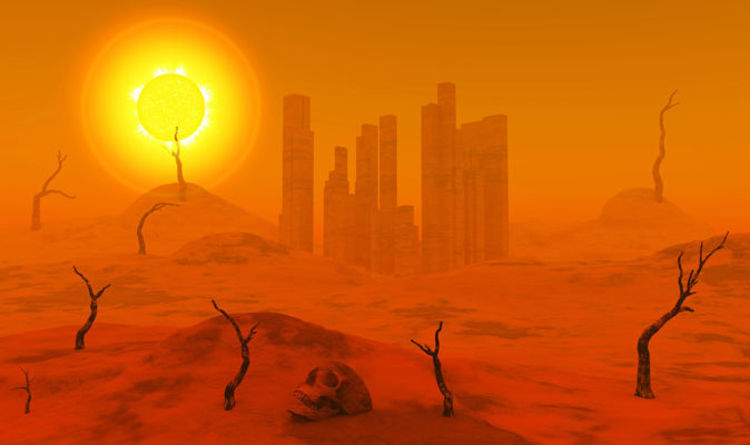 
The planet is currently in the midst of another mass extinction as species around Earth continue to die out.

It it is not the first mass extinction throughout the planet’s history – it is actually the sixth.

According to biologists, just 0.01 percent of animals throughout history are living today.

This means virtually all species will die off at one point or another.

Without giving a timeframe on when it will happen, experts believe that humans’ time will come one way or another, either through a natural disaster – such as the asteroid which wiped out the dinosaurs – or a man-made event like war.

Luke Strotz, a post-doctoral researcher in invertebrate palaeontology at the University of Kansas, wrote for The Conversation: “Death is the inescapable endpoint of life.

“And this is as true for species as it is for individuals. Estimates suggest 99.99 percent of all species that have ever lived are now extinct.

“All species that exist today – including human beings – will invariably go extinct at some point.”

With climate change occurring throughout the globe, Mr Strotz states that now is the ideal time for mass extinctions as it fits with other planetary die-offs.

He added: “We certainly know that changes in temperature are one important element.

“Almost every major rise or fall in global temperatures in Earth history has resulted in the extinction of a swath of different organisms.”

However, as humans are spread out across the globe, it does boost our chances of survival, but a freak event like the asteroid could still wipe us out.

Mr Strotz: “The size of the geographic area a species occupies is also crucial. Species that are broadly distributed are less likely to go extinct than those that occupy a small area or whose habitat is disjointed.

“There are also random phenomena that cause extinction. The meteorite responsible for the extinction of about 75 percent of life at the end of the Cretaceous Period, including the non-avian dinosaurs, is perhaps the best example of this.