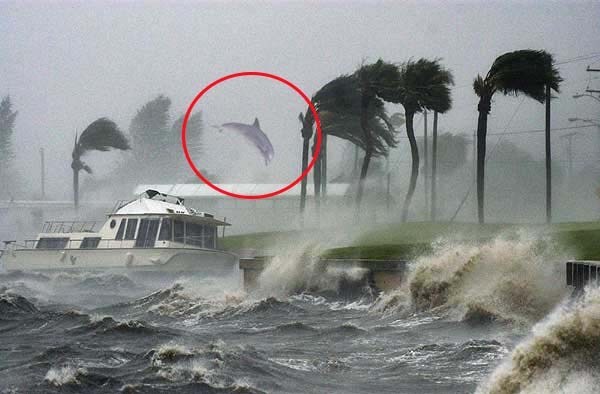 
A photographer with The Weather Channel captured the strength and tragedy of severe weather this evening.

Yes, he captured a dolphin that was caught in Hurricane Dorian’s winds. Really?

“I have photographed hundreds of tornados and four hurricanes. I’ve never seen winds so strong that dolphins were blown from the ocean.” said Ernie Schwartz of The Weather Channel.

According to People of Lancaster wildlife expert Earl Sneed this is not an uncommon tragedy of hurricanes. “Dolphins swim away from hurricanes. And when they get closer to shore in shallow water they can be swept away by the winds.” explained Sneed.

Well it seems that this isn’t the only dolphin swept away in Hurricane Dorian’s winds:

While the storm that hit the Bahamas Sunday as a Category 5 yielded some legitimate images of mass destruction, it is not blowing sea creatures through the air as some doctored images might lead people to believe.

A doctored image showing a dolphin purportedly blowing through the air as a result of the storm’s catastrophic winds is making its way across the internet this week … again.

So this is just fake! But these completely absurd fakes have become an undeniable part of hurricane hysteria. And there are probably a few that are taking them seriously.

An Expert Explains Why The Radioactive Water Stored at Fukushima Should Be Released : ScienceAlert
Scientists Have a Plan to Turn Earth Into a Giant Observatory : ScienceAlert
Babies May Not Be Born With a Microbiome After All, Scientists Say : ScienceAlert
People Who Don’t Exist Look More Real Than Actual People, Study Finds : ScienceAlert
Sword Mistaken For Replica Is Actually An Ancient 3,000-Year-Old Weapon : ScienceAlert