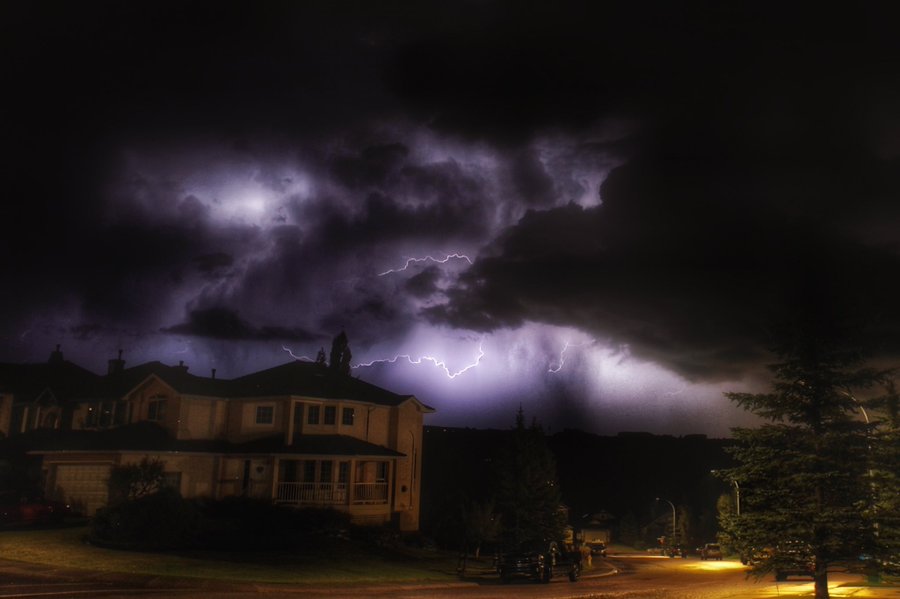 
Sunday night was quite a show for Albertans, as a massive thunderstorm rolled through the area.

The Alberta thunderstorm was so bad it was even reported that lightning was striking every few seconds. It even struck a house in Calgary, the residents of which managed to escape uninjured.

The intense storm moved through Calgary and nearby regions, lighting up the sky throughout the night.

A severe thunderstorm warning was put in place for the area by Environment Canada throughout the night but was lifted around midnight as the storm started to pass through.

With the storm lasting most of the evening, residents were able to get some amazing footage of the lightning that was striking down. It was even reported that during the peak of the storm, lightning was striking every few seconds, making the storm the ultimate light show.

Nothing beats a late season nocturnal lightshow in Alberta, I can tell you this. Looking southeast from Hwy 27 and Sec Hwy 791 east of Olds between 11-11:30PM this evening. #ABStorm #StormHour pic.twitter.com/ZnYMBXWw3r

Videos show the night skies lighting up with multiple lightning strikes every few seconds. While there seems to be an abundance of strikes, it is still unclear exactly how many strikes hit the ground across Alberta throughout the night.

Sadly, with lightning also comes the danger of fire, and one house ended up facing the brunt end of the storm in Calgary. As lightning struck, a house in the city ended up going up in flames. Luckily, the fire crews brought the fire under control.

The Calgary Fire Department responded to the scene around 2 a.m. at the house in the University Heights neighborhood. According to a press release from the fire department, the house suffered severe damage and was left in ruins. The two residents were left displaced by the lightning strike but remained uninjured.

Thanksfully, nobody got hurt during the intense lightning storm across Calgary, Alberta. Always be careful when lightning strikes, it can turns deadly.

Study of 500,000 Medical Records Links Viruses to Alzheimer’s Again And Again : ScienceAlert
‘Funky Worm’ Fossil Helps Explain The Mysterious Origins of Amphibians : ScienceAlert
This Physicist Says Electrons Spin in Quantum Physics After All. Here’s Why : ScienceAlert
Scientists Create Shapeshifting Humanoid Robot That Can Liquefy And Reform : ScienceAlert
Dogs Can Be Aggressive For Lots of Reasons, And One of Them Is You : ScienceAlert