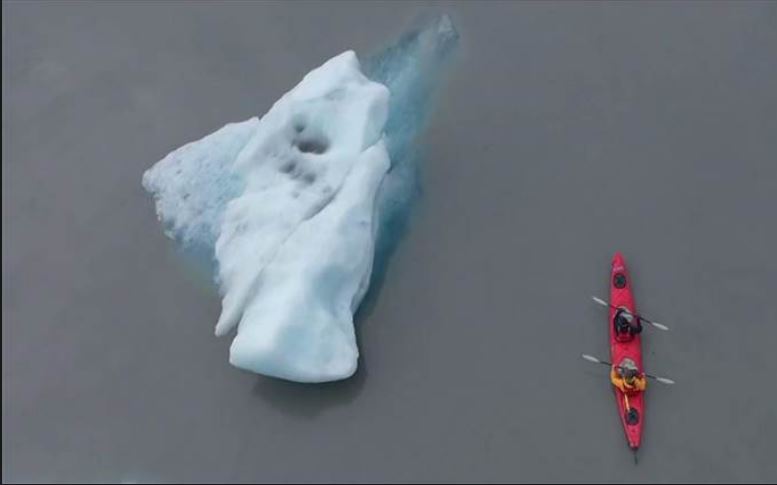 
Alaska’s temperature has risen by 4 degrees Fahrenheit in the last 50 years, that’s compared with 2 degrees for the rest of the planet.

Standing on the Spencer Glacier the term “epic” feels appropriate. Especially when you consider getting to this place requires a train ride, paddling across an almost freezing lake and a lift from a helicopter.

But for University of Alaska climate researcher Brian Brettschneider, the remarkable view is overshadowed by the fact that rising temperatures are chipping away at the breathtaking glacier.

If 4 degrees doesn’t sound like much, consider that the rest of the planet has risen only by 2 degrees in the last 50 years. At Spencer Glacier, that extra 2 degrees has been responsible for nearly 12 inches of surface-ice loss every day and the disappearance of some 100 feet off the glacier’s face each year.

July 4, when the temperature climbed to 90 degrees, was the hottest day ever in Anchorage, Alaska, sending residents out to sunbathe and splash in area lakes. Before that, an 85-degree day in 1969 held the record.

Just last summer, Matt Szundy, owner of local outfitter Ascending Path, was able to help his guests onto the glacial ice by foot. In only a winter’s time, walk-on access to Spencer Glacier has been halted because of additional melt. Before, visitors used to kayak across a lake to reach the glacier’s face, strap on a pair of crampons and walk onto the ice. Now to see its majesty up close, they must board a helicopter.

The added time, effort and money it takes to reach the glacier has cost Szundy business and illustrates how a changing climate is making some of nature’s most spectacular places less accessible.

Among the ice’s attractions are huge sluices created by running water, melting from the glacier’s surface.

“I love the aesthetic of what melt water creates, it’s fun to guide on, it’s amazing to experience,” Szundy said. “But the cause of it is heartbreaking for me.”

He calls the glacier he’s come to know as his “office” the “canary in the coal mine” for a warming planet.

Alaska’s warmer summer temperatures this year aren’t yet linked to climate change, though the signs are all there, Brettschneider says.

The unusual high-pressure system that’s baked the state has been helped by unusually warm ocean temperatures around Alaska, thanks in part to declining sea ice. Those two factors, added to the well-established long-term warmer weather, have helped make this a record-setting summer.

In addition to the loss of tourism, the consequences of a warmer 49th state are serious. Rising seas have already required the relocation of some remote villages. And broadly, much of Alaska’s infrastructure is designed for the cold. A shift of even a few degrees could threaten the stability of everything from pipelines to roads. The costs could add up to well into the billions.

Alaska’s plight was highlighted Wednesday by a pair of studies that call skepticism about climate change into question, suggesting that the recent warming of the earth is not part of a cycle.

As a visit to Spencer Glacier highlights, Brettschneider points out however fast the change comes, Alaska will feel it first.

“These glaciers have been responsible for a large fraction of the sea level rise that’s already been observed and that will continue. It literally is the tip of the iceberg.”

Although the Earth is globally warming, increasing sea levels and devastating front-beach properties around the world, the largest glacier in Greenland is increasing its volume of ice, and Antarctica seems to be gaining ice pack too. Rather than climate change aI would say we are in a phase of complete climate chaos, with freaking govenments trying to control weather.

Bacteria Can Use Plastic Waste as a Food Source, Which Isn’t as Good as It Sounds : ScienceAlert
An Iceberg The Size of London Has Broken Free From Antarctica Ice Shelf : ScienceAlert
This Physicist Says Electrons Spin in Quantum Physics After All. Here’s Why : ScienceAlert
Viagra Linked to Much Lower Risk of Death in Men, But Questions Remain : ScienceAlert
‘Funky Worm’ Fossil Helps Explain The Mysterious Origins of Amphibians : ScienceAlert