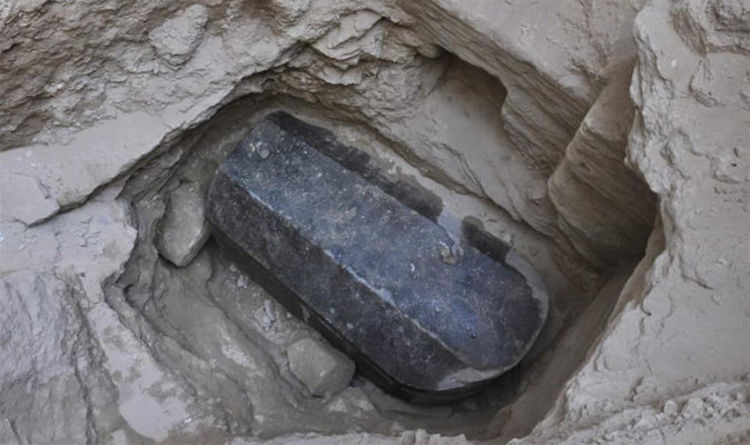 
The black granite sarcophagus is 265cm long and 165cm wide and dates back to the Ptolemaic period between 305BC and 30BC.

It was discovered in the ancient city of Alexandria and a layer of mortar between the lid and the body of the sarcophagus is evidence that it has not been opened since it was closed more than 2000 years ago.

A carved alabaster head was also discovered at the site which is likely to belong to whomever is inside the tomb.

A statement from the Egyptian Ministry of Antiquities read: “An Egyptian archaeological mission from the Supreme Council of Antiquities uncovered an ancient tomb dating back to the Ptolemaic period.

“Dr Ayman Ashmawy, Head of the Ancient Egyptian Antiquities Sector, said that the tomb was found at a depth of 5 m beneath the surface of the land.”

The next step is for researchers to find out what is inside the coffin without damaging it.

The archaeological mission that led to finding the sarcophagus began when a construction company planned to build near the site.

Under Egyptian law, due to the vast history which is associated with the country, construction firms are required to commission an archaeological dig on site before they begin building.

Ancient Egypt has been in the headlines recently after a mysterious mummified body, that hadn’t been seen by the public for over a century, has been uncovered with two heads – one belonging to a crocodile and one to Pharaonic Egyptian princess killed by the creature.

The remains are the combination of the head of a human and a reptile.

They belonged to an unidentified Ancient Egyptian Princess and the head and body of a crocodile from the River Nile.

How Many Ants Live on Earth? Scientists Came Up With an Answer : ScienceAlert
The Orbit of a Sun-Like Star Reveals The Nearest Black Hole Ever Found : ScienceAlert
A Weird Blob of Hot Gas Is Whizzing Around Sagittarius A* With ‘Mind-Blowing Velocity’ : ScienceAlert
We Have Our First Look at Neptune’s Rings in 33 Years, And They’re Glorious : ScienceAlert
Early Puberty in Girls Surged in The Pandemic, And We May Finally Know Why : ScienceAlert