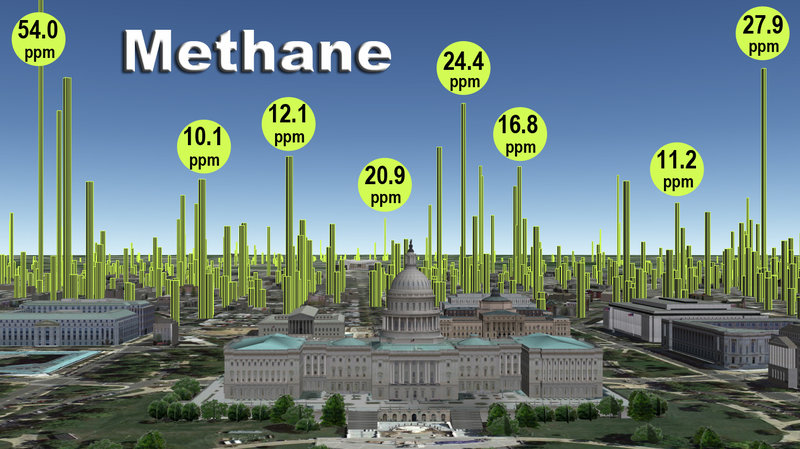 
Natural gas, long touted as a cleaner burning alternative to coal, has a leakage problem.

A new study has found that leaks of methane are twice as big as official tallies suggest in major cities along the U.S. eastern seaboard.

The study suggests many of these fugitive leaks come from homes and businesses — and could represent a far bigger problem than leaks from the industrial extraction of the fossil fuel itself.

“This is an issue that people tend to ignore when trying to estimate methane emissions,” says Kathryn McKain, an atmospheric scientist with the National Oceanic and Atmospheric Administration’s Earth System Research Laboratory in Boulder, Colorado. When compared with the global amount of natural and human-driven methane emissions, she notes, “These emissions are small, but they’re preventable.”

The methane problem in the US

When burned for heat or power, methane emits less carbon dioxide (CO2) than fossil fuels such as coal. But when leaked directly into the atmosphere, its warming effect can be dozens of times stronger than CO2, depending on the time scale over which the warming is measured.

The team’s analyses suggest the five biggest urban areas studied — which together include about 12% of the nation’s population — emit about 890,000 tons of methane each year.

The vast majority of that, at least 750,000 tons, comes from methane leaks from homes, businesses, and gas distribution infrastructure, rather than natural sources and other human-driven sources such as landfills.

That’s well over triple the amount emitted by gas production in the Bakken shale formation in the U.S. Midwest.

It’s also much more than the amounts estimated by the Environmental Protection Agency (EPA). A 2016 report suggested methane emissions in the six major urban areas the researchers studied totaled only 370,000 tons.

“It’s easy to say that the EPA inventory is low, but it’s not as easy to say why it’s low,” Kort says. Same for a very dangerous insecticide damaging children’ brains!

One possible reason for this huge discrepancy: The EPA estimate includes leaks from the natural gas distribution system, but it doesn’t include leaks from homes and businesses. Those “beyond the meter” emissions could include, for example, tiny whooshes of incompletely burned methane from home appliances such as gas stoves, furnaces, and hot water heaters. Taken together over a city of millions, such emissions could be substantial.

Not an isolated phenomenon

The team’s results are “a confirmation and expansion” of what was already known from smaller-scale studies in the Boston and the Washington, D.C.–Baltimore areas, says Steven Wofsy, an atmospheric chemist at Harvard University. The new study, conducted over six metropolitan areas, “shows this is not an isolated phenomenon.”

The new findings could also incentivize researchers to study where these emissions are coming from. Possibilities include leaking pipelines, pumps, and valves; water treatment systems; equipment in power plants fueled by natural gas; and leakage within homes and businesses.

However, it is difficult to extrapolate the new leakage estimates to other urban areas across the United States since other megapoles are younger and are thus likely to have newer infrastructure that is less prone to leaks.

Worldwide, annual methane emissions from natural and human-driven sources add up to about 550 million tons.