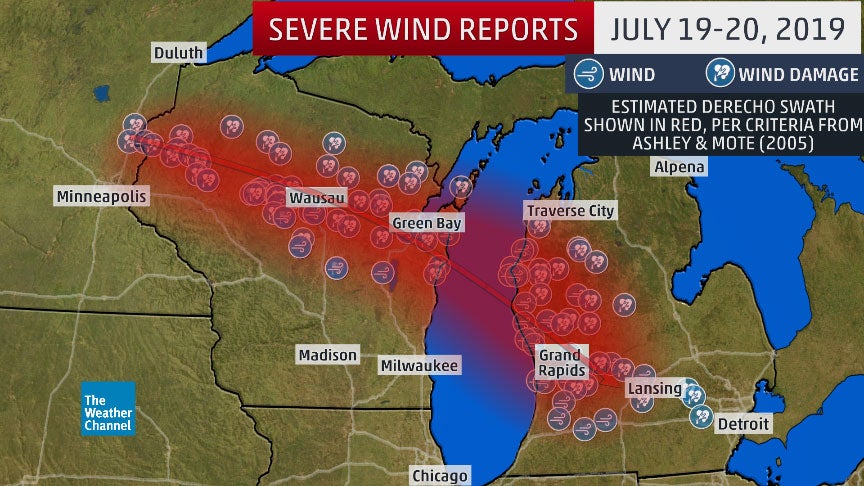 Soaring temperatures gave way to severe storms Friday evening in the upper Midwest, packing powerful winds that knocked out power to hundreds of thousands and hail as big as baseballs that left numerous cars damaged along a Minnesota interstate.

As the line of severe storms known as a derecho moved into Michigan, hundreds of thousands lost power. As of early Saturday morning, more than 225,000 homes and businesses remained without power, according to PowerOutage. Later in the morning, outages came down to 162,000.

WOW! This is insane! Look at this storm developping:

Before pushing into Michigan, the Derecho brought strong winds that downed trees and knocked out power to much of Burnett County, according to PowerOutage.us. In northwestern Wisconsin, more than 42,000 homes and businesses were without power Friday night.

Turtle Lake, Wisconsin, about 55 miles northeast of St. Paul, was particularly hard hit. A roof was ripped off one business, and siding was partially torn from a hotel.

@McDermedFox9 @CodyMatzFox9 Turtle Lake area is pretty bad. No power. Evacuating the Casino because of flooding. Highway 63 is closed. pic.twitter.com/v1GVLKXFI9

An EF1 tornado that was on the ground for nine miles damaged a barn, hundreds of trees and tore the roofs of several building in Marathon County, the National Weather Service reported.

Oh no. Wonder what our cabin looks like. RT @tiajohnsononair: STORM DAMAGE: This is what Mountain, Wisconsin looks like after last night.
Crews with Oconto County Highway Department did confirm with me that it was a tornado that hit. @WBAY pic.twitter.com/bqcU46eQeV

If the wind wasn’t bad enough, a tornado touched down near Knowlton, Wisconsin, located roughly 50-55 miles west-northwest of Green Bay around 8:30 p.m. CDT, destroying a barn.

Moment of impact on our dock in Balsam Lake, Wisconsin. Seeing all damage this am waiting to hear if it was a tornado that hit Polk Co. #kare11weather pic.twitter.com/O4YzOuWSsn

Trees were downed in Green Bay as the line of thunderstorms arrived late Friday evening.

OCCUPANTS ARE OK. South of Pine City on I 35 – a really scary situation as massive hail flew into cars. pic.twitter.com/gKrX4KjsXK

US stay strong! No injuries were immediately reported in Minnesota in the wake of the storms.

An insane hailstorm during a very strong Derecho across upper Midwest. Be prepared for the next one!