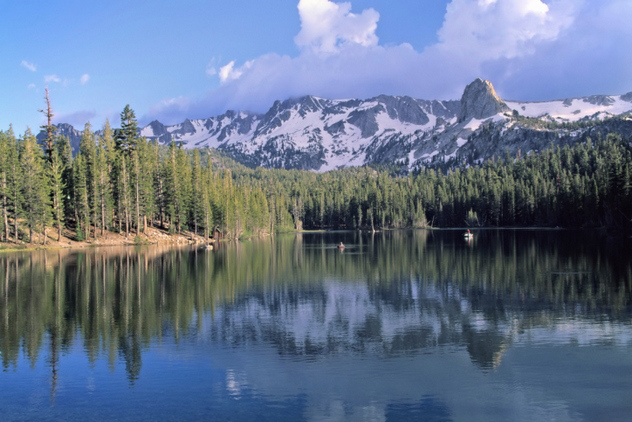 
Horseshoe Lake is a wonderful place within Long Valley Caldera Field in California.

It has everything one could ever want for outdoor excursions: boating, swimming, sandy beaches, picnic areas, hiking trails, and over 40 hectares (100 acres) of dead trees killed by gases sweeping from the magma beneath.

That last, more unique feature is the result of a series of small earthquakes in 1989 and 1990. These quakes opened pathways for carbon dioxide to rise to the surface from magma below, eventually killing the trees.

While there is little danger of a volcanic eruption, a potentially lethal risk lurks in the Horseshoe Lake area, as the gas levels fluctuate unpredictably, like in African killer lakes!

A family could have a picnic on the lake one year and be asphyxiated the next.

Warning signs are posted around Horseshoe Lake to inform visitors of the danger. Carbon dioxide is heavier than air, making lower areas — such as depressions in the ground, or the shore and surface of the lake — more dangerous.

Most of the time, Horseshoe Lake is safe. However, fatalities have occurred due to the gas.

A man died on the lake in 1998, and three ski patrol members fell into a snow pit on nearby Mammoth Mountain and asphyxiated in 2006.

In this video you see the effect of Lake Horseshoe carbon dioxide… Dead trees!

The seepage of CO2 gas from below Mammoth Mountain and the continuous occurrence of local earthquakes are signs of the ongoing geologic unrest in the area.