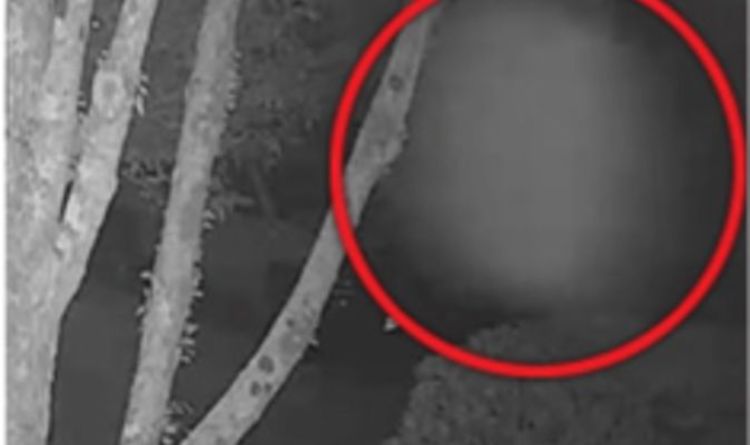 
A white, orb-like figure is then seen appearing to slowly making its way from the right to the left of the screen.

The orb then appears to disappear off the top of the screen.

Footage has been posted on Reddit and sparked intense debate about the paranormal.

The clip was also shared in a forum for ghosthunters.

The video was entitled: “Would love some insight on what my motion cam recorded last night?”

Some viewers were convinced it was proof of the afterlife as a paranormal spirit had been caught on camera.

One said: “From a paranormal view, it looks like a slow moving mist-like spirit.”

Another posted: “So there is an afterlife?”

However, many viewers took a more sceptical approach.

Experts state out of objects passing a camera – that are not in its focal point – can appear like a blurry translucent blob, particularly at night.

One poster said: “It’s an out-of-focus bug crawling across the lens.”

Another added: “It’s a spider. You can even see the silk thread shine at a point.”

Others believed it was not an animal moving across the screen that set the camera off, as the object “seems to move behind the wall”.

There has been a glut of alleged ghost footage hitting the internet in recent weeks, sparking furious debate about the afterlife, Dailystar.co.uk reports.

A woman has posted two clips from CCTV inside her home which she is now convinced is haunted.

And there have been several seemingly inexplicable phantoms found on Google Maps.

Footage also emerged from Jamaica Inn in Cornwall, reportedly Britain’s most haunted pub, showing a phone receiver flung off for no apparent reason.

One Simple Idea Makes It Much Easier to Manage Your Weight Over Time : ScienceAlert
An Expert Explains Why The Radioactive Water Stored at Fukushima Should Be Released : ScienceAlert
Our Body Temps Have Been Dropping For 160 Years. Gut Microbes May Be Playing a Role : ScienceAlert
Hypertension Drug Shown to Extend Lifespan And Slow Aging in Animals : ScienceAlert
Bacteria Can Use Plastic Waste as a Food Source, Which Isn’t as Good as It Sounds : ScienceAlert