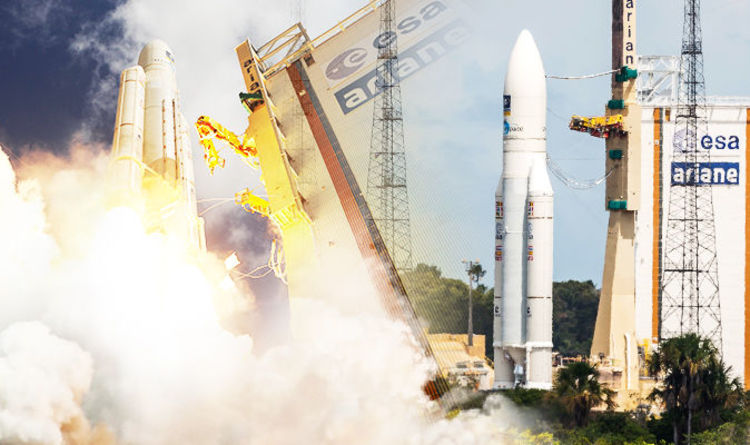 
The European Galileo satellites will be delivered into space by commercial rocket company Arianespace.

You can follow the rocket launch as it unfolds live right here on Express.co.uk, courtesy of the European Space Agency (ESA).

The Galileo launch live stream above will kick off from the Guiana Space Center in Kourou, French Guiana, at 12.05pm BST.

The launch live stream will follow an Ariane 5 rocket carrying the Galileo payload through its final preparations and countdown.

The ESA stream will continue to broadcast the rocket until about 1pm BST when the rocket undertakes ascent and first flight phases.

After cutting out from the launch the stream will return at 3.05pm BST to broadcast the separation of the Galileo spacecraft from the rocket.

You can read more about the Galileo launch stream here.

Read below for the latest Galileo satellite launch live updates:

Arianespace CEO Stéphane Israël tweeted said: “We have liftoff! Ariane 5 has ascended from the Spaceport in French Guiana with its payload of four Galileo satellites.”

12.23pm BST: Galileo launch parameters are given the green light

All launch parameters at the French Guiana launch pad have been given the ok to launch the Ariane 5 rocket.

The ESA tweeted: “Six mins to go! Tune in now for the launch of Ariane5 with 4 new Galileo satellites from Europe’s Spaceport in French Guiana.

11.30am BST: Ariane 5 takes to the skies for the third time this year

The Ariane 5 launch of the Galileo satellite marks the thirds time in 2018 the Ariane space rocket blasts off to space.

Mission length is expected to be around three hours, 56 minutes and five seconds.

10.56am BST: Galileo launch completes the first stage of the system

The four satellites, dubbed satellite 23 to satellite 26, will update the European navigations system.

“Currently providing Initial Services, Galileo is interoperable with GPS and Glonass, the US and Russian global satellite navigation systems.

“By offering dual frequencies as standard, Galileo is set to deliver real-time positioning accuracy down to the meter range.

“The constellation will count 24 operational satellites plus in-orbit spares, of which 22 already have been put into orbit by Arianespace.”

After the launch, the European Global Navigation Satellite Systems Agency (GSA) will take over responsibility for the satellites on behalf of the European Union.

The GSA will take full control of the Galileo spacecraft the moment they separate from the rocket.

Operations and setting up the satellites will be carried out in collaboration with the European Space Agency (ESA).

Arianespace estimates the first two satellites will detach from Ariane 5 around three hours and 26 minutes into flight time.

The entire operation is expected to last no longer than four hours, 40 minutes and 52 seconds from liftoff to mission end.

The Galileo system began operating over Europe in December 2016 to provide the EU with its very own navigations system.

Galileo is operated by the GSA on behalf of the European Union.

The ESA officially transferred Galileo supervision responsibilities over to the GSA in July 2017.

Galileo’s navigation payloads are constructed by Airbus-owned Surrey Satellite Technology in the United Kingdom and the spacecraft are manufactured by OHB System in Bremen, Germany.

These Are The Most Distant Star Clusters Ever Seen, And We Nearly Missed Them : ScienceAlert
New Discovery Means Parkinson’s Could Be Diagnosed With a Swab in Just 3 Minutes : ScienceAlert
‘Unbelievable’ Video Shows 2 Bees Working Together to Open a Soda Bottle : ScienceAlert
3 Major Aquatic Animal Groups Can Trace Their Lineage to This Ancient Armored ‘Worm’ : ScienceAlert
Superconductivity Model With 100,000 Equations Now Contains Just 4 Thanks to AI : ScienceAlert