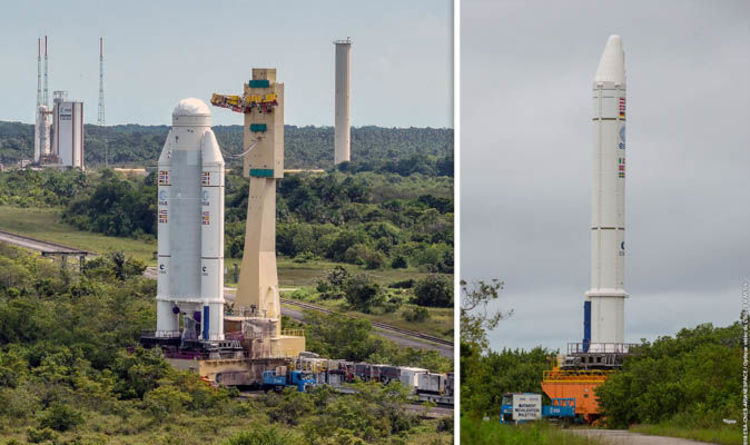 
The Arianespace Galileo launch is scheduled for later today at 12.35pm BST (7.25am EDT).

The four Galileo satellites will blast off onboard an Ariane 5 rocket from the Guiana Space Center in Kourou, French Guiana.

The event marks the fourth Arianespace rocket launch and will be broadcast live online on the European Commission Audiovisual Services (EbS+) website.

You can also watch the Galileo launch live online here on Express.co.uk.

The EbS+ live stream will kick off at 12.05pm BST in Kourou and will end around 1pm BST.

The Galileo launch broadcast will cover the last preparation and final countdown stages before lift-off, ascent and first flight phases.

In a mission description, Arianespace revealed the four Galileo satellites, satellite 23 to satellite 26, will build upon the European positioning system.

The company said: “For its fourth launch of the year, Arianespace will orbit four more satellites for the Galileo constellation.

“This mission is being performed on behalf of the European Commission under a contract with the European Space Agency (ESA).

“For the third time, an Ariane 5 ES version will be used to orbit satellites in Europe’s own satellite navigation system; with all Galileo spacecraft having been launched to date by Arianespace.

“Arianespace is proud to mobilise its entire family of launch vehicles for the benefit of Europe’s ambitions and its independent access to space.”

The four Galileo satellites are estimated to have a liftoff mass of 717.7 kg.

The first two satellites will separate from the rocket approximately three hours and 26 minutes after launch, followed by the remaining two rockets 20 minutes later.

At 3.05pm BST, the EbS+ service will live stream the separation of stage of the launch.

Four hours and 40 minutes after launch, the Arianespace launch will wrap up.

When paired with GPS, the Galileo system aims to provide better positioning accuracy for devices back on Earth.

Galileo is operated by The European GNSS Agency on behalf of the European Union.

Control of a 6-Qubit Processor in Silicon : ScienceAlert
Secret Clues in Tutankhamun’s Tomb Reignite The Idea That Nefertiti Is Hidden Nearby : ScienceAlert
‘Dark Data’ Is Leaving a Huge Carbon Footprint, And We Have to Do Something About It : ScienceAlert
Long COVID Is Still Raising More Questions Than Answers, Say Researchers : ScienceAlert
Behold, The Epic Last Images Taken by NASA’s Asteroid Redirection Test Spacecraft : ScienceAlert