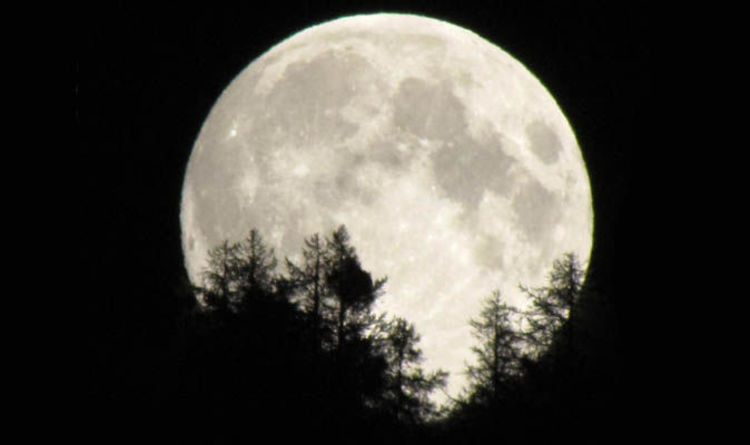 
The enchanting glow of the September Full Moon peaked just before 4am UK time on Tuesday, September 25.

But the Moon is now fading out of sight as it slowly but surely reaches the same ecliptic longitude with the Sun.

On October 9, the so-called New Moon will emerge shrouded in complete darkness, leaving impatient moon-gazers with nothing to look at.

Today, the Moon is in the Waning Gibbous phase with roughly 88 percent of its face lit up by the Sun.

When is the October Full Hunter’s Moon?

The next Full Moon will peak once again on the night of October 24.

The Moon will be 100 percent illuminated by about 5.45pm BST, while it is still just below the horizon.

If you plan to watch the Full Moon from London, the lunar orb will rise over the horizon at about 6.16pm BST.

Why is the October Full Moon called the Hunter’s Moon?

It is a common tradition for many Native American tribes to keep track of the changing seasons and associated changes in the landscape, by naming the Full Moon phases appropriately.

For instance, the August Full Sturgeon Moon signalled old sturgeon were ready to be caught in the US’ Great Lakes.

The June Full Strawberry Moon, on the other hand, was named after ripening strawberries in the wild.

Next month’s Hunter’s Moon, however, gave hunters the sign it was time to go hunting in preparation for winter.

“This was the traditional time of year for hunting and slaughtering in preparation for the coming winter.

“The ancient cross-quarter day of Samhain on October 31 was the traditional day for harvesting and slaughtering as well, and the death night of the old year.

“Today we know this day as Halloween and it is come to be associated with ghosts and graveyards.”

What are all the Full Moon dates this year?