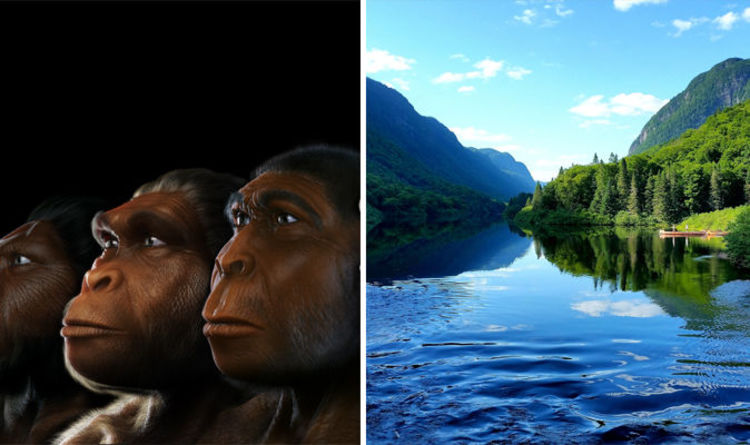 
Some evolutionists suggest humans evolved from apes which spent most of their time by the water, and describe our distant ancestors as ‘semi-aquatic’.

There are several characteristics which some experts believe highlight our aquatic history.

For starters, we are the only animals to permanently walk upright. This is apparently down to the fact that we had to develop that stance as it is easier to keep our heads above the water.

We are also covered in a layer of fat which keeps us warm from the cold water and like every other marine animal, we do not have hair.

Rhys Evans, an expert on head-neck physiology at the Royal Marsden hospital, London, said: “Humans are very different from other apes.

“We lack fur, walk upright, have big brains and subcutaneous fat and have a descended larynx, a feature common among aquatic animals but not apes.”

“Humans have particularly large sinuses, spaces in the skull between our cheeks, noses and foreheads.

“But why do we have empty spaces in our heads? It makes no sense until we consider the evolutionary perspective.

“Then it becomes clear: our sinuses acted as buoyancy aids that helped keep our heads above water.”

Some supporters of the theory add that human’s brain chemistry is also a sign that our ancestors spent most of the time in water.

“It boosts brain growth in mammals. That is why a dolphin has a much bigger brain than a zebra, though they have roughly the same body sizes.

“The dolphin has a diet rich in DHA. The crucial point is that without a high DHA diet from seafood we could not have developed our big brains. We got smart from eating fish and living in water.

“More to the point, we now face a world in which sources of DHA — our fish stocks — are threatened. That has crucial consequences for our species.

“Without plentiful DHA, we face a future of increased mental illness and intellectual deterioration.

“We need to face up to that urgently. That is the real lesson of the aquatic ape theory.”

Hubble And Webb Pics Reveal DART Impact Was Even Bigger Than Expected : ScienceAlert
A Rare Condition Makes Hair Truly Untamable, All Thanks to These Genes : ScienceAlert
Experts Estimate The Scale of The Nord Stream Pipelines Methane Leak : ScienceAlert
Biology Inspires a New Kind of Water-Based Circuit That Could Transform Computing : ScienceAlert
New Discovery Means Parkinson’s Could Be Diagnosed With a Swab in Just 3 Minutes : ScienceAlert