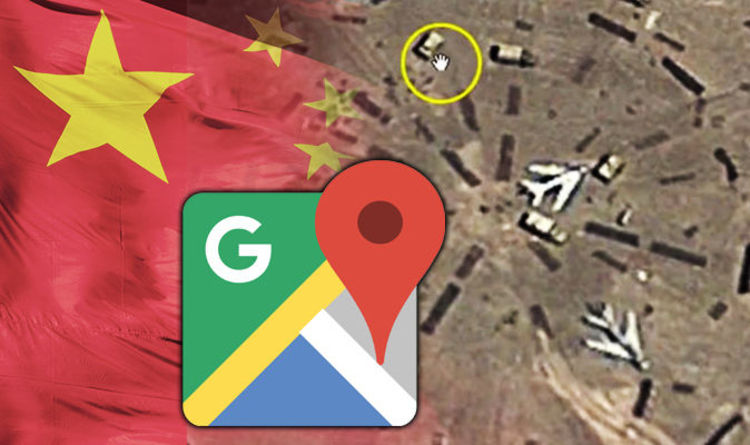 
Situated in the middle the Gobi desert, the series of strange structures have baffled internet users.

The focal point is a strange “Stonehenge-like” circle purported to contain three aircrafts, which the narrator cannot identify.

The aircrafts are all pointing outwards, and as the Youtuber, ThirdPhaseOfMoon, looks at the time lapse on Google Earth, you can see that the number of planes there drops from four to three between 2005 and 2015, despite the fact that no tracks are left behind, and there is no runway close to it.

The narrators of the video say: “We’ve got a strange thing going on here in Asia.

“It almost looks like Stonehenge from this aerial view.

“I can’t explain what this is all about, it doesn’t make much sense.

“Three airliners within the circular formation of rocks and buildings, I’m not entirely sure what I’m looking at.

“It almost looks like Stonehenge from this aerial view.

“There are no co-ordinates or location given by Google.

The real Area 51, deep in the Nevada desert, is at the centre of many alien-related conspiracy theories.

It is claimed that alien flying saucers crashed on Earth, such as the alleged 1947 Roswell incident, and that the wreckage and even corpses were taken to Area 51 for experimentation and to be analysed away from public view.

One theory suggests that USAF scientists have tried to emulate the alien technology to create their own top-secret spy craft capable of travelling into space at the base.

People are unsure what is there, but that has not stopped many putting forward their theories.

YouTuber Aaron Watson wrote: “I found information on it, it’s all in Chinese but so far I’ve gotten Chinese area 51.”

While some believe that it is China’s version of Area 51 and a secret military base, others have opted for other explanations.

Additionally, to the right of the patch of aircrafts is a mysterious square formation with jagged lines running through it.

The images of the squares have led people to believe the site was created for satellite calibration.

Satellite calibration targets are used as a point of focus for satellite imagery so controllers can focus their lenses.

Astronomers Think They Know The Reason For Uranus’s Kooky Off-Kilter Axis : ScienceAlert
Amazing New Fossils Provide Earliest Known Traces of The Evolution of Our Jaws And Limbs : ScienceAlert
Long COVID Is Still Raising More Questions Than Answers, Say Researchers : ScienceAlert
Bitcoin’s Climate Impact Is Bigger Than Beef Farming – And It’s Only Getting Worse : ScienceAlert
It Turns Out There Is Such a Thing as Good Gossip, According to New Research : ScienceAlert