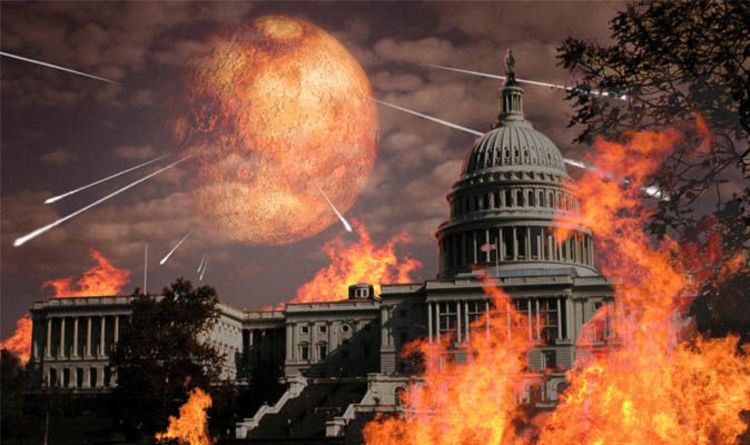 
Pastor Paul Begley from West Lafayette in Indiana, US, is certain humanity and the planet we inhabit faces certain doom. In a dire apocalyptic warning to his followers, the Evangelical preacher astonishingly claimed evidence of death and fire is hidden in the Bible. Quoting passages from the Apostle Peter, Pastor Begley suggested the world’s days are numbered. The firebrand preacher said: “The Earth is going to melt with a fervent heat.”

According to pastor Begley, there are a number of signs in the heavens and the Earth which prove his biblical claims true.

The upcoming January 21 Blood Moon lunar eclipse is one such supposed portent of doom prophesied by holy Christian scripture.

The preacher then speculated whether the planet’s demise will come at the hands of the debunked Planet X or Nibiru.

“You can’t just say: ‘Well I don’t believe in doomsday so I’m just going to go on.’

“That doesn’t change the fact the biblical ramifications of the prophecies are going to come to pass.

“You see, time will run out. There’s an angel that’s going to put one foot on land and one foot on sea and declare that times shall be no more.”

The doomsday preacher stressed there is “no question” of the Earth’s demise and urged the faithful to be ready.

In a passage in the Second Peter Chapter 3, the Apostle is said to have described the fiery death woes of Earth at the end of the world.

The piece of scripture in question reads: “But the day of the Lord will come like a thief.

“The heavens will disappear with a roar; the elements will be destroyed by fire, and the earth and everything done in it will be laid bare.

“Since everything will be destroyed in this way, what kind of people ought you to be?

READ MORE: End of World prophecy: 10 countries that may not survive the next 20 years

“You ought to live holy and godly lives as you look forward to the day of God and speed its coming.”

All of this in pastor Begley’s opinion could be evidence of the mythical planet Nibiru – a widely debunked conspiracy theory claiming a rogue planet 10-times bigger than Earth is barreling towards us.

Christian conspiracists who support the bizarre theory claim mention of Nibiru in the Bible is hidden behind the name Wormwood.

Pastor Begley said when this comes to pass, the Earth’s poles will shift in a cataclysmic disaster never seen before by mankind.

He said: “This Planet X – Nibiru – or some other type of natural phenomenon sent by God to shake the heavens and the Earth, will they go away just because we don’t believe, or you don’t believe or someone else doesn’t believe?

“It doesn’t change the infallible word of God that we are in the end times.”

According to the world’s leading scientists, however, there is no evidence to suggest Nibiru or Planet X will destroy the planet – because it does not exist.

NASA’s simply stated: “Nibiru and other stories about wayward planets are an Internet hoax.”