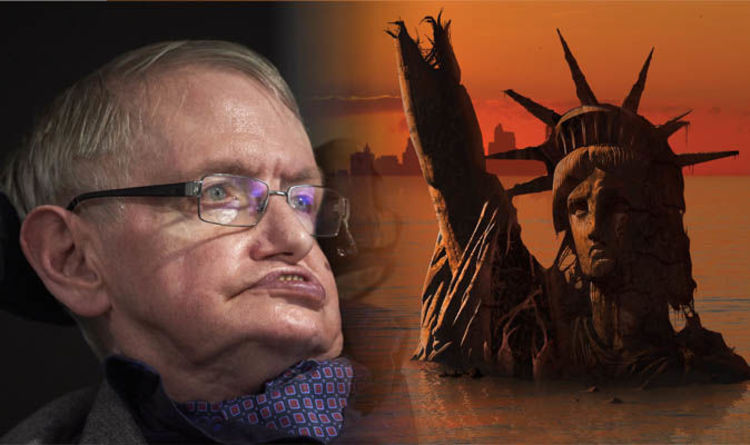 Professor Stephen Hawking warned in Brief Answers to the Big Questions nuclear war will be the most likely cause of our extinction.

The black hole expert, who died in Mach this year aged 76, said humanity now stands on the brink of a “Second Nuclear Age”.

He said the threat of rogue asteroids and the effects of climate change are the second most dire risk to humanity.

Professor Hawking warned: “Nuclear war is still probably the greatest threat to humanity at the present time. It is a danger we have rather forgotten.

“Russia and the United States are no longer so trigger-happy, but suppose there’s an accident, or terrorists get hold of the weapons these countries still have. And the risk increases the more countries obtain nuclear weapons.

“Even after the end of the Cold War, there are still enough nuclear weapons stockpiled to kill us all, several times over, and new nuclear nations will add to the instability.”

Professor Hawking said a nuclear Armageddon or other natural cataclysms will likely “cripple” the planet in the next 1,000 years.

He urged humanity to remain “on guard” regardless of the danger at hand.

The cosmologist’s other major concern was human-led climate change is accelerating the world’s early demise.

He warned humans are slowly choking the planet with greenhouse gases, are decimating forests like the Amazon and are melting the ice caps.

Human activity on the planet is “exacerbating global warming” past the point of no return – and there is nowhere else for humans to go.

Deadly asteroid impacts could also obliterate all life on Earth and end the world as we know it.

READ MORE: Stephen Hawking made a MAJOR CHANGE to most respected scientific theory just before he died

The last great asteroid blast some 60 million years ago killed off the dinosaurs and there is nothing to say this will not happen again in the future.


Nuclear war is still probably the greatest threat to humanity

Professor Hawking said: “I think we are acting with reckless indifference to our future on planet Earth.

“At the moment, we have nowhere else to go, but in the long run, the human race shouldn’t have all its eggs in one basket, or on one planet.

“I just hope we can avoid dropping the basket before we learn how to escape from Earth.”

With these problems in mind, the physicist said humanity has to choose between staying on a dying planet or heading out into the stars to colonise the solar system.

READ MORE: Stephen Hawking fed the poor in a final act of kindness

Choosing the former, in his option, will lead to the ultimate annihilation of the human race.

Professor Hawking conceded the technology to populate the stars is still just out of our grasp.

But he also argued the pace of technological advancement witnessed during his lifetime promises a positive future for a space-faring humanity.

He said: “I expect that within the next hundred years we will be able to travel anywhere in the solar system, except maybe the outer planets.

“But travel to the stars will take a little longer. I reckon in 500 years, we will have visited some of the nearby stars.

“It won’t be like Star Trek. We won’t be able to travel at warp speed. So a round trip will take at least ten years an probably much longer.”

Professor Hawking’s book Brief Answers to the Big Questions was revealed to the world this week by his children and colleagues.

Lucy Hawking, the cosmologist’s daughter, said: “Communication was so important to our father in his lifetime and we see this book as an integral part of his legacy, bringing his scientific writing and his social commentary together into one beautiful edition, laced with a dose of his trademark dry humour.”

Scientists Have Found A New Way to Detect Alien Worlds Beyond Our Solar System : ScienceAlert
Weird Creature With No Butt May Not Be Our Ancient Ancestor After All : ScienceAlert
Researchers in South America Discover a New Species of Tiny but Tough Dinosaurs : ScienceAlert
Scientists Say ‘space Bubbles’ Could Shield Earth From The Sun, But Would It Work? : ScienceAlert
Robot Shows It’s Possible to Swim Through The Emptiness of a Curved Universe : ScienceAlert