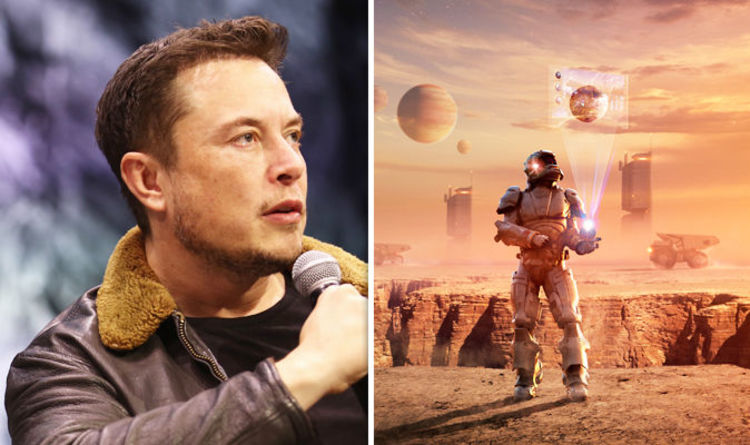 
The SpaceX CEO made the unexpected claims during a question and answer session at the South by Southwest technology and culture festival in Austin, Texas, yesterday.

He stated: “We are building the first Mars, or interplanetary ship, and I think we’ll be able to do short trips, short up and down flights, by first half of next year.”

However, the 46-year-old was eager to level expectations by stating his timings have not always been completely accurate.

He went on: “Although sometimes, my timelines are a little, you know…

“People have told me that my timelines historically have been ‘optimistic’.

“I’m trying to ‘recalibrate’ to some degree here.”

Mr Musk explained he feels once SpaceX completes it ambitious cargo mission to Mars by 2022, it will kickstart a stream of development from other companies.

He said: “I think once we build it we’ll have a point of proof, something that other companies and countries can go and do.

“They certainly don’t think it’s possible, but if we do they’ll up their game.”

In addition to detailing his lofty ambitions, the SpaceX CEO warned those who are eager to make the journey to the Red Planet there is a “good chance” they could die.

He continued: “It will be far more dangerous – difficult, dangerous, good chance you will die.”

The billionaire also detailed how society would function on a Mars colony.

He commented that people would “vote directly on issues instead of going through representative government”.

He went on: “Maybe it requires 60 per cent majority vote to get a law in place, but any number over 40 per cnet can remove a law.”

He added it should be “easier to get rid of a rule than to put one in” as he detailed what life could be like on another planet.

On more trivial notes, when questioned on who he was inspired by, Mr Musk said that Kanye West was someone he looked up to.

The billionaire also stated that Mars will “need everything from iron foundries to pizza joints”.

He remarked: “Mars should really have great bars…A Mars bar.”

Dogs Can Be Aggressive For Lots of Reasons, And One of Them Is You : ScienceAlert
Viagra Linked to Much Lower Risk of Death in Men, But Questions Remain : ScienceAlert
Scans of Mummified ‘Golden Boy’ Reveal He Was Covered in Magical Protections : ScienceAlert
Dozens in 7,000 Year Old Mass Grave Were Carefully Decapitated After Death : ScienceAlert
One Simple Idea Makes It Much Easier to Manage Your Weight Over Time : ScienceAlert