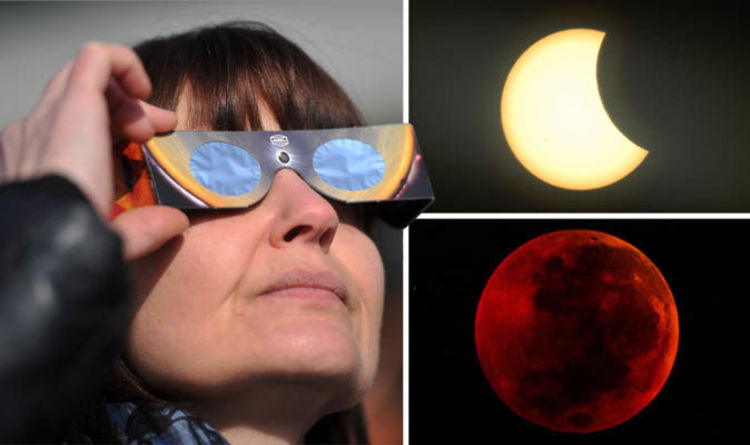 
The August eclipse will peak in the late morning hours (Central Time) over the Northern Hemisphere, near to the North Pole.

According to astronomy website EarthSky.org, two eclipses always occur within a fortnight of each other – approximately two weeks apart.

The Blood Moon itself came exactly 14 days after a partial eclipse of the Sun on the morning of Friday, July 13, in the Southern Hemisphere.

And when the January 31 Super Blue Blood Moon stunned viewers around the globe, it was shortly followed by a partial eclipse of the Sun on February 15.

But does this mean another lunar eclipse will appear two weeks after Saturday, August 11?

Unfortunately, NASA’s Goddard Space Flight Center estimates stargazers will have to wait until the night of January 21, 2019, for the next Blood Moon eclipse – six months from now.

A lunar eclipse and solar eclipse tend to occur in the same eclipse season, which is one of two annual periods when the orbital path of the Moon creates the perfect conditions for an eclipse to occur.

During these two brief windows of opportunity, lasting slightly longer than a single calendar month, two eclipses will happen one after another.

But if we are lucky enough for one eclipse to happen early in the cycle, then we stand a good chance of seeing a total of three eclipses in rapid succession.

Stargazers hit the jackpot this summer wth a total of three eclipses rattling off between July 13 and August 11.

Next year, we will only witness two eclipses each during eclipse season in January and July, with an additional one in December.

EarthSky wrote on its website: “There are from four to seven eclipses every year. Some are lunar, some are solar, and some are partial.

“All are marvellous to behold – a reminder that we live on a planet – a chance to experience falling in line with great worlds in space.”

Every time the Moon completes a trip around the Earth every 27 days, it crosses the Earth’s ecliptic at two locations or nodes. The ecliptic is the plane of the Earth’s orbit around the Sun.

When the Moon crosses the ecliptic it creates an opportunity for a solar or lunar eclipse to occur.

Astronomy Now author Keith Cooper explained: “On odd occasions – roughly once every 18 months on average – the Moon crosses the ecliptic at a time when it is aligned with Earth and the Sun.

“If this crossing takes place when the Moon is between Earth and the Sun, we see a solar eclipse.

“Two weeks later the Moon moves to the other side of Earth, with the alignment still the same, causing the Moon to slip into Earth’s shadow. Here on Earth, we see a lunar eclipse.”

The Tonga Eruption’s 50 Million Tons of Water Vapor May Warm Earth For Months to Come : ScienceAlert
Wolves Really Can Become Attached to Humans Like Dogs Can, Adorable Study Finds : ScienceAlert
Does IQ Decline as We Age? One Type of Intelligence Peaks in Your Twenties : ScienceAlert
Experiment Reveals What 1 Hour in Nature Does to The Human Brain : ScienceAlert
The Real Reason For Using Flight Mode Is Not What You Think : ScienceAlert