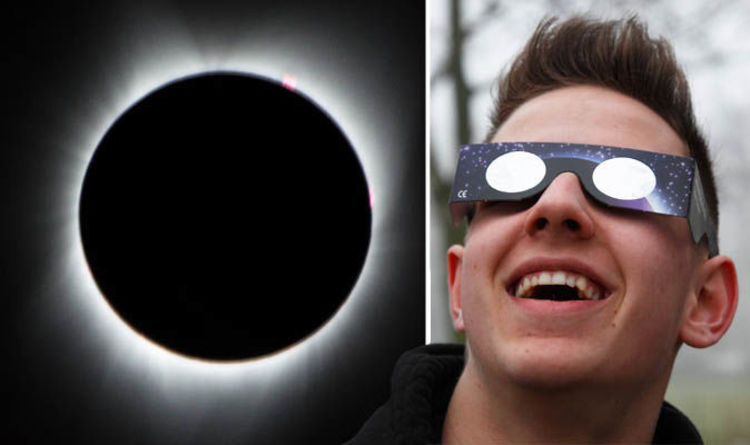 
The partial eclipse of the sun will be visible in the morning hours of Saturday, August 11.

The eclipsed Sun will pass over portions of Northern Europe, including Iceland and Scandinavia, before moving towards Asia.

Astronomers expect eclipse coverage to vary wildly in these areas with different locations seeing between five and 30 percent of the eclipse.

Over the North Atlantic and Greenland, the eclipse is expected to begin around 8.02am UT or 9.02am UK time.

Unfortunately, the partial eclipse will not be visible from the UK, appearing instead over the northern tips of Scandinavia and Iceland.

Reykjavik in Iceland, Longyearbyen in Norway, Rovanierni in Finland and Moscow in Russia should all catch a partial glimpse of the eclipse.

The eclipse will peak around 9.46am UT (10.46am BST) when the Moon and Sun reach so-called maximum eclipse.

Maximum eclipse occurs when the solar eclipse reaches its highest possible magnitude below one.

A total solar eclipse always has a magnitude of one or greater and the magnitude of a partial eclipse is always lower.

This is typically expressed as a decimal such as 0.9 or 0.7.

Maximum eclipse will also mark the midway point of the solar eclipse which thereafter will head to competition.

By around 11.30am UT (12.30pm BST), the partial eclipse will completely wrap up and the Moon will pass out of the Sun’s sunlight.

The August eclipse will last about three hours and 30 minutes from start to finish.

According to Polish astronomer Ariel Majcher, a lucky few in Norway cold see up to 50 percent of the Sun disappear behind the Moon during this window of opportunity.

He wrote in the monthly science periodical Delta: “The New Moon falls almost exactly 19 years after the famous New Moon, during which the shadow of the Silver Globe passed through Europe.

“This time as well we will witness an eclipse of the Sun but it will be a partial eclipse, seen from the Arctic, central Asia and Scandinavia.

“The biggest phase, about 74 percent, will be seen from the Bear Islands in the East Siberian Sea.

“In Europe we can see the phenomenon from Finland, Sweden and Norway, with the maximum Moon covering up to 34 percent of the Sun’s diameter in the northern reaches of the continent and up to 50 percent in Spitsbergen.”

After the August eclipse, stargazers will have to wait another six months for a partial eclipse of the Sun on January 6, 2019.

After this, the Earth’s shadow will completely obscure the Moon on the night of January 21, 2019, and a total solar eclipse will then appear on July 2, 2019, over the Pacific and South America.

One final partial solar eclipse will rise on the dayside of the planet on December 26, 2019.

These Are The Most Distant Star Clusters Ever Seen, And We Nearly Missed Them : ScienceAlert
Control of a 6-Qubit Processor in Silicon : ScienceAlert
The Pacific Is Destined to Vanish as Earth’s Continents Meld Into a New Supercontinent : ScienceAlert
3 Major Aquatic Animal Groups Can Trace Their Lineage to This Ancient Armored ‘Worm’ : ScienceAlert
Weight Lifting in Old Age Does More Than Just Keep Your Muscles Strong : ScienceAlert