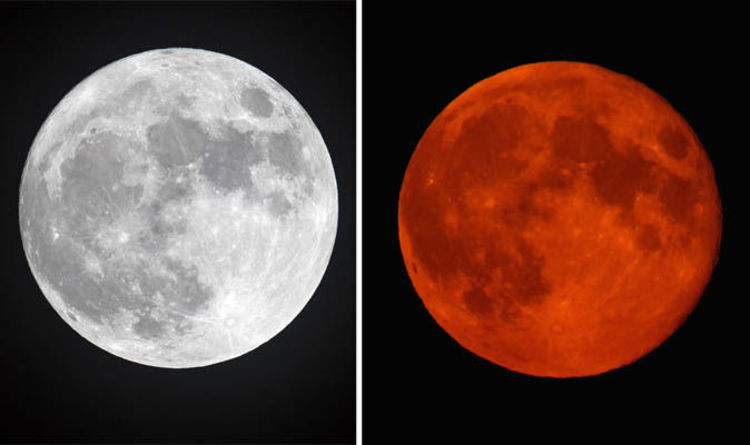 
Astronomers up and down the country are excited about the prospect of a total lunar eclipse gracing the night sky.

The last lunar eclipse visible over the UK appeared in September 2015 but the good news is the wait is almost over.

The next eclipse is scheduled to darken the moon on the night of Friday, July 27, 2018.

Total lunar ellipses occur roughly twice a year when the moon and Earth’s shadows cross paths but are not always visible from everywhere on the globe.

Scientists at NASA’s Goddard Space Flight Centre explained: “From the Earth, the moon will appear to darken and turn a deep red before eventually returning to normal. This is called a lunar eclipse.

“If we were to look at what happens during an eclipse from space, it would look something like this.

“First the moon passes through what is called the Penumbra, where the sun’s light is only partially obscured. This results in only a slight darkening of the moon.

“As the moon continues along its path, however, it enters what is called the Umbra, where all direct light from the sun is blocked.”

And if that was not enough, the eclipse is expected to be the longest of the 21st century.

According to astronomer Bruce McClure of EarthSky.org, the eclipse will feature in the sky for one hour and 43 minutes.

With an additional one-hour-long partial eclipsing before and after totality, stargazers can look forward to an almost four-hour-long lunar spectacle.

The eclipse will be visible in large swaths of Europe, Australia, Asia, Africa and South America.

But the stellar showmanship does not stop there because once the moon the passes into Earth’s shadow, it will turn a deep red colour rather than vanish from sight.

Total lunar eclipses are sometimes known as Blood Moons because of the bizarre red-orange glow the moon appears to emanate.

The effect is known as Rayleigh scattering and is responsible for painting the skies blue and sunsets orange.

Rayleigh scattering during a Blood Moon occurs when sunlight bending around Earth scatters in the planet’s atmosphere.

The scattering filters out certain bands of visible light, leaving behind red and orange to fall on the moon.

NASA Goddard said: “When light from the sun goes by the side of the Earth, it passes through a long and thick layer of atmosphere.

“Shorter lengths of sunlight like blue scattered by the atmosphere so that by the time the light has finished its trip to the moon, more of the longer wavelengths like red are left over.

“On the Earth the same thing happens at sunset as the ground you stand on gradually passes into night.

“As the eclipse ends, the moon leaves the Umbra and returns to its normal colour and the leaves the Penumbra, brightening to its original cycle.”

The entire process typically lasts anywhere from a few minutes to a few hours.

Greenhouse Gases Just Hit a New High in The Atmosphere, Right Ahead of COP26
What Happens if 4 Electrons Join Up? A Brand New State of Matter Says a Recent Study
Physicists Created a Supernova Reaction on Earth Using a Radioactive Beam
Dinosaur Invades The UN to Make Important Observation in Razor-Sharp Video