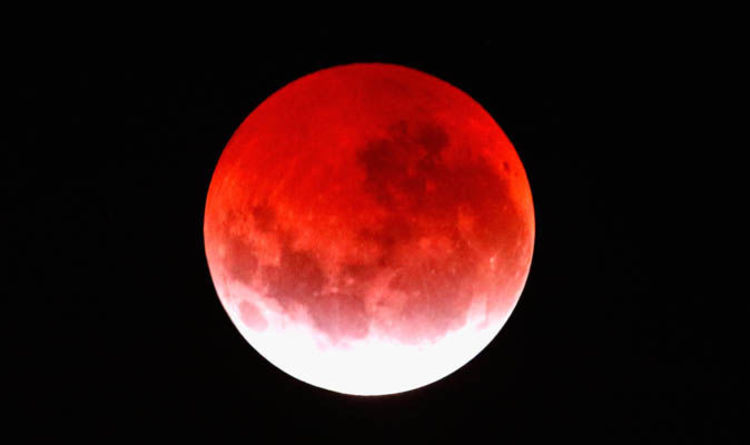 
The upcoming Blood Moon eclipse on July 27 will be the longest eclipse to rise in the 21st century.

Clocking in at one hour and 43 minutes, the July Blood Moon will be nearly 40 minutes longer than the Super Blue Blood Moon eclipse on January 31 this year.

In addition to the total eclipse, the moon will be partially eclipsed for about an hour before and after the main event.

In total, stargazers will be treated to about four hours worth of eclipse goodness.

According to Noah Petro, lunar scientist at NASA’s Goddard Space Flight Center, the length of the eclipse is dictated by the position of the moon when it passes through Earth’s shadow.

Next month the moon will pass close to the centre of Earth’s shadow, or umbra, making it last longer.

The shadow cast by the sun extends like a cone out into space from the Earth.

Dr Petro told Space.com: “The moon can either graze through the cone, or go right through the middle. That gets a longer-duration eclipse.

“This time, the moon is passing closer to the centre of that cone, and it’s therefore a little bit longer than the eclipse we had back in January.”

On top of this, the moon will be at its farthest orbital point from Earth which means it will take slightly longer to escape the umbra.

But how exactly does all of this cause the Blood Moon eclipse to change colour to a deep red?

During the eclipse, the moon ought to disappear from sight completely but scatted sunlight paints the moon red to orange instead.

The unusual effect is known as Rayleigh scattering and is the same explanation for the colour of the sky and sunsets.

Rayleigh scattering filters out certain bands of colour when sunlight bends around the planet’s atmosphere and scatters the light in the air.

Red and orange bands on the visible spectrum are least affected by this phenomenon which causes the eclipsed moon to change colour, thus the Blood Moon nickname.

According to data from NASA’s Goddard Center the Blood Moon eclipse will only be visible in certain parts of the world.

The space agency said the eclipse will be visible in South America, Europe, Africa, Asia and Australia.

In the UK, the Blood Moon will already rise over the horizon in Earth’s shadow sometime around 8.50pm BST over London.

The exact times of the Blood Moon will vary by a few minutes between locations but the eclipse will be visible throughout the entire country.

The next total lunar eclipse to grace the skies will take place next year on January 20-21, 2019.

Greenhouse Gases Just Hit a New High in The Atmosphere, Right Ahead of COP26
What Happens if 4 Electrons Join Up? A Brand New State of Matter Says a Recent Study
Dinosaur Invades The UN to Make Important Observation in Razor-Sharp Video
Physicists Created a Supernova Reaction on Earth Using a Radioactive Beam