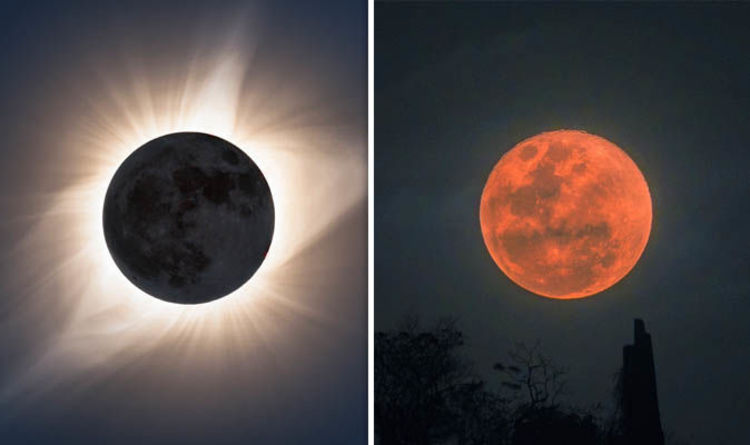 
An eclipse seen over most of Europe and the UK last week left many people looking forward to the next major astronomical event.

With the next lunar eclipse not slated until early next year, the world is hoping to spot their next space spectacle soon – and they may not have to wait long.

The world has been lucky this month, as there have been two eclipses of the Moon.

The Sun has also seen two partial eclipses, but no total eclipses have been observed this year.

When is the next total solar eclipse in the USA?

Space fanatics based in the US looking to see a total solar eclipse will be unlucky as there are no total eclipses scheduled for quite a while.

In fact, there are no total eclipses of the Sun due for another five years.

The US will not be able to view a total solar eclipse until April 8, 2024, when the Sun will be fully blocked by the Moon.

The total Eclipse will be making its way from the south in Mexico, tracking over the USA towards the east coast around New York.

It’s not just the USA that will be without a solar eclipse however, as the next total eclipse anywhere on the planet won’t be until 2019.

This forthcoming eclipse will only be viewable from South America however, as it tracks across the southernmost tip of the continent.

Lucky viewers in the south of Argentina will be able to see the eclipse move across their country from the coast of Santiago to the Mar Del Plata.

When will the next eclipse be?

Total eclipse aside, there are a number of other eclipses set to take place this and next year, as NASA has confirmed a whole batch.

The last solar eclipse to take place this year will be in one week, on August 11.

The partial eclipse taking place on August 11 will rise in the north, with some limited visibility predicted for Scandinavia, Greenland, Iceland and parts of Canada and Asia.

After the August 11 eclipse, the Perseids Meteor Shower is the next astronomical event, visible from the east coast of the USA.

The next time we get to see a Blood Moon is relatively soon, as one will be visible on January 21, 2019.

Totality of this Blood Moon from start to finish will again be visible for people in the UK.

An annular eclipse – when the outline of the Sun is visible in a ‘ring’ – will occur on Boxing day next year.