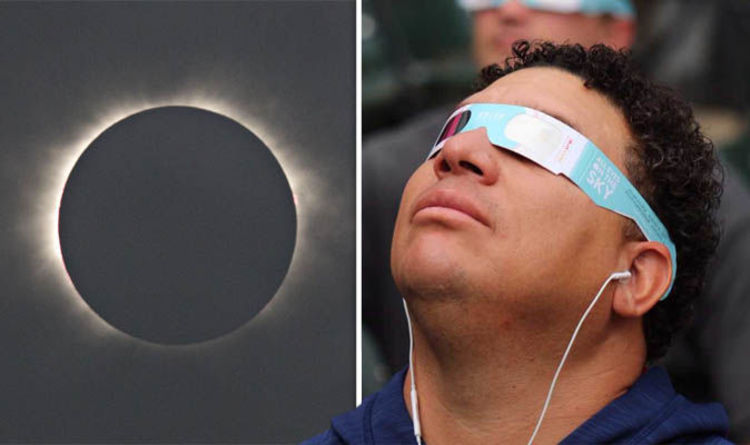 
This summer is undergoing a renaissance of eclipses with a partial solar eclipse in July and August and the brilliant Blood Moon eclipse on July 27.

The first solar eclipse took a small bite out of the sun on the unlucky date of Friday, July 13, and was only visible from the southernmost parts of Australia.

But the second of two this year promises to be more visible, passing mostly over parts of northern Europe and northeast Asia in the daylight hours on August 11.

According to maritime astronomer Bruce McClure of EarthSky, lucky stargazers in parts of Canada, Iceland and Greenland should also be in position to see the eclipse.

He said: “The new supermoon on August 11, 2018 ushers in a partial eclipse in the daytime, and dark night for this weekend’s Perseid meteor shower.

“The northern Arctic areas, which are drenched in daylight at this time of year, are in a good position to watch the solar eclipse but not the Perseids.

“This partial eclipse occurs in the daylight hours on August 11 in the Arctic, far-northeastern Canada, Greenland, Iceland, Scandinavia and much of Asia – north and east.”

The eclipsed Sun’s path of totality is outlined in the NASA Goddard Space Flight Center map below.

The NASA chart shows the eclipse will last about three and a half hours, starting at sunrise in northeastern North America.

The eclipse will then wrap up at sunset along the Asian Pacific coast.

You can see the exact path of totality in the NASA animation below. Every place within the moving grey semicircle will see various stages of the partial eclipse.

The best place to watch the eclipse will be at the North Pole, where about 65 percent of the Sun will be eclipsed by the Moon.

But for those of you who are not planning a venture across the Arctic Ocean, you will be able to spot the eclipse from Helsinki in Finland, Beijing in China and Alert in Canada among others.

The International Astronomical Union’s Working Group on Solar Eclipses said in a statment: “The August 11, 2018, partial solar eclipse will be visible from the northernmost parts of the world.

“The northern Swedish city of Kuruna, about 100 miles above the Arctic Circle, will have 25 percent coverage.”

A narrow band of eclipse visibility, up to 35 percent of coverage, is expected to extend down to Seoul, South Korea, and about 20 percent coverage in Shanghai, China.

Minimal eclipsing will extend as far out as Moscow, Russia, where only about two percent of the Sun’s diameter will be shrouded.

If you plan to see the solar eclipse in person, remember to protect your eyes with specialist equipment.

The Tonga Eruption’s 50 Million Tons of Water Vapor May Warm Earth For Months to Come : ScienceAlert
This Is How Much Fossil Fuel The World Is Sitting on, And It’s a Time Bomb : ScienceAlert
Termites Love Global Warming So Much That They May Make It Worse, Says Study : ScienceAlert
REM Sleep May Exist to Heat Your Brain Up From The Inside : ScienceAlert
There Are New FDA Safety Warnings About Breast Implants. Here’s What We Know : ScienceAlert