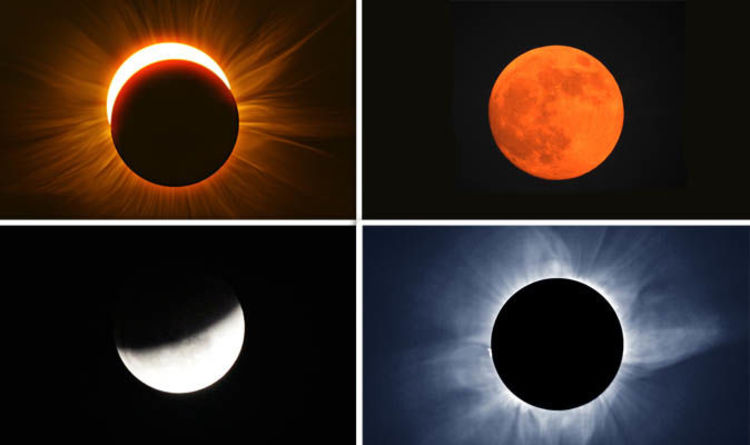 
The upcoming Blood Moon eclipse will rise on the night of Friday, July 27, over swathes of Central Asia, Africa, Europe, the Pacific and South America.

The July eclipse is touted as the longest lunar eclipse of the 21st century and its main phase will last around one hour and 43 minutes.

On the night of the eclipse, the full moon will pass through the centre of Earth’s darkest shadow, its umbra, and turn a red to orange hue from refracted sunlight.

But the July event is not the only eclipse to grace the skies this year and stargazers across the globe can look forward to t least a few more eclipses.

When are the other lunar eclipses in 2018?

The first eclipse occurred on the night of January 31 and was dubbed the Super Blue Blood Moon because of its close proximity to the planet.

Data from NASA’s Goddard Space Flight Center shows the July eclipse is the second and final total lunar eclipse of the year. But there are still partial solar eclipses to come.

There are only two total eclipses in 2018 because this astronomical alignment of the sun, Earth and the moon only happens twice a year on average.

NASA said: “If you looked at the moon over the course of a few weeks you’d probably notice it looks slightly different every day.

“The change in its shadow is based on where the moon is in its orbit.

“We call this cycle the phases of the moon and it occurs roughly once a month.

“At least twice a year, however, something quite different happens – the moon passes through the shadow cast by the Earth causing it to look extremely unusual for a short period of time.

“From the Earth, the moon will appear to darken and turn a deep red before eventually returning to normal. This is called a lunar eclipse.”

Next year in 2019, there will only be one total lunar eclipse on January 21, followed by a partial eclipse on July 16.

The year 2020 promises to be a bit more active with three penumbral eclipses on January 10, June 5, July 5 and November 30.

However, a penumbral eclipse is a very subtle event and most amateur astronomers will likely not see the Earth’s shadow bite into the moon.

When are the other solar eclipses in 2018?

After the stunning August 2017 total solar eclipse, astronomers are anxious to see the sun disappear behind the moon once again.

According to NASA, two partial eclipses of the sun are scheduled to appear in the coming days and weeks but their viewing conditions are less than ideal.

The first of the two will show up on Friday, July 13, but will only be visible over the southernmost parts of Australia – if at all.

The second partial solar eclipse will appear over the northernmost parts of Europe and northeast Asia on August 11.

In both cases, most people will likely miss the eclipses entirely.

But the good news is a total lunar eclipse will peak over South America and the South Pacific on July 2, 2019.

The total eclipse will be followed by an annular, or ringed eclipse, on December 26, 2019.

Annular eclipses occur when the moon passes in front of the sun, creating a brightly burning halo of fire around the moon.

The next total solar eclipse after that is scheduled for December 14, 2020.

We May Finally Know Why Oceans in The Southern Hemisphere Are Getting So Warm : ScienceAlert
NASA Is Sending a Rotorcraft to Titan in 2027. Here’s Where It Will Land. : ScienceAlert
The Pacific Is Destined to Vanish as Earth’s Continents Meld Into a New Supercontinent : ScienceAlert
‘Unbelievable’ Video Shows 2 Bees Working Together to Open a Soda Bottle : ScienceAlert
A Famous Golden Palace in Spain Is Turning Purple, And Now We Know Why : ScienceAlert