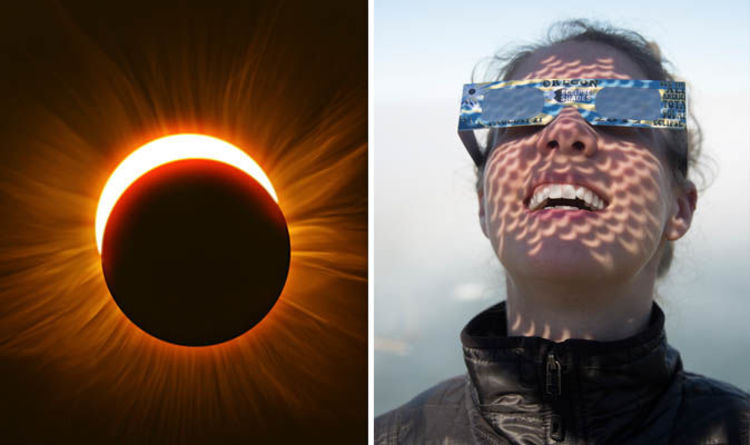 
The August 11 solar eclipse is expected to be the most watched one of 2018, according to TimeandDate.com, as viewing opportunities across the world are prime.

The partial eclipse should be visible from northern and eastern Europe, the United States, and northeast Asia during daylight hours.

The International Astronomical Union’s Working Group on Solar Eclipses said: “The August 11, 2018, partial solar eclipse will be visible from the northernmost parts of the world.

What happens if you look at an eclipse?

A solar eclipse occurs when the moon moves between the sun and Earth and blocks the sun’s rays.

There are four types of solar eclipses and partial eclipse happens when the moon only partly obstructs the sun, casting its penumbra – outer shadow – on Earth.

Looking at the sun is extremely dangerous and can cause blindness or other forms of permanent eye damage.

NASA has previously explained the dangers in a eye safety paper.

The paper states: “When a person looks repeatedly or for a long time at the sun without proper protection for the eyes, this photochemical retinal damage may be accompanied by a thermal injury – the high level of visible and near-infrared radiation causes heating that literally cooks the exposed tissue.

“This thermal injury or photocoagulation destroys the rods and cones, creating a small blind area.

“The danger to vision is significant because photic retinal injuries occur without any feeling of pain (there are no pain receptors in the retina), and the visual effects do not occur for at least several hours after the damage is done.”

To safely watch a solar eclipse, use special eclipse glasses or to make a pinhole projector using two pieces of card.

What happens during a solar eclipse?

A solar eclipse can only happen during a new moon when the sun and Earth are in a three-line configuration known as a syzygy.

During a partial eclipse, the three do not align symmetrically meaning the moon will only cast its outer shadow on the sun.

This effectively looks like the moon has taken a small bite out of the sun.

During a total eclipse, the moon will cast its darkest part of its shadow, known as the umbra, on Earth.

The effect will make it seem as if the day has turned to night.

Watch a Tiny Robot Blob Transform Into Even Tinier Bits to Squeeze Through Cracks : ScienceAlert
There Are New FDA Safety Warnings About Breast Implants. Here’s What We Know : ScienceAlert
Experiment Reveals What 1 Hour in Nature Does to The Human Brain : ScienceAlert
Why House Fly Barf Is an Overlooked Potential Vector of Disease : ScienceAlert
We Have Our First Look at Neptune’s Rings in 33 Years, And They’re Glorious : ScienceAlert