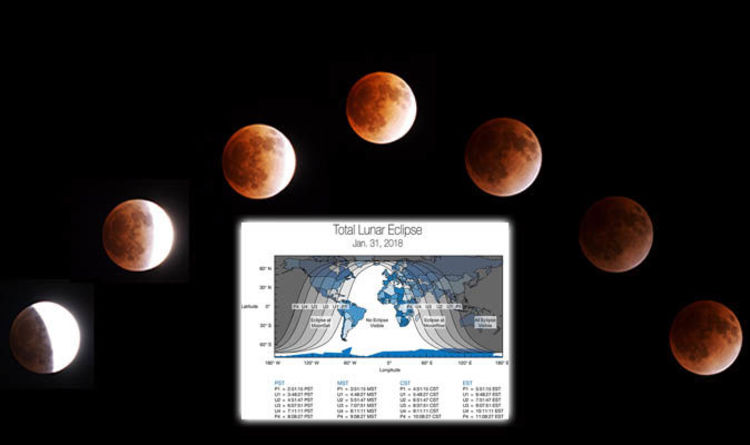 
Americans will be treated to a rare celestial event on Wednesday (January 31), when a blue supermoon is turned red during a total lunar eclipse.

The phenomenon, which last occurred in the US in 1866, concludes a series of recent supermoons, dubbed the ‘Supermoon Trilogy’ by NASA.

The space agency has said that the moon will orbit 223,068 miles from Earth, rather than the usual 238,855 miles, causing it to appear up to 14 percent bigger in the night sky.

Wednesday will also see a blue moon, which occurs whenever two full moons rise in the same calendar month.

If that wasn’t enough, there will be a spectacular total lunar eclipse. Also known as a blood moon, the eclipse will make the moon glow an orangey red.

Skywatchers on the US’s west coast will have the best views of the eclipse, with NASA confirming that residents of Hawaii, Alaska and California all the way up to western Canada should be able to see the entire display, weather permitting.

Totality will last a full 1 hour and 14 minutes, ending at 6.05am, leaving plenty of time to take in the breathtaking views.

Viewing conditions will not be as favourable for those on the eastern coast, because totality takes place so close to sunrise.

New Yorkers and anyone living on the Atlantic coast are advised to wake early and travel to a high-up location away from any manmade light pollution to get the best views.

Mr Johnston added: “Your best opportunity if you live in the East is to head outside about 6.45am and get to a high place to watch the start of the eclipse.

The NASA map above shows what time each stage of the eclipse starts in different time zones across the United States.

Those who aren’t able to watch the eclipse live can stream the entire event online.

Robotic telescope service Slooh will be livecasting the entire eclipse from 5.45am EST on January 31 (2.45am PT).

Read more: HOW RARE IS THE JANUARY SUPER MOON ECLIPSE?

‘Structured Water’ Is Not What People Claim. Don’t Believe The Hype, Scientist Says
This Artificial Synapse Can Run a Million Times Faster Than Ones in The Human Brain : ScienceAlert
Deepwater Horizon Oil Spill Still Detectable 10 Years Later, Scientists Say
Deep-Sea Sponges Can ‘sneeze’ Out Mucus, and The Footage Is Weirdly Mesmerizing : ScienceAlert
Record-Breaking Experiment Could Solve a Huge Challenge in Quantum Computing